Mac Malware is a type of threat that effectively attacks an Apple Mac computer. Contrary to what many computer users think or have believed for many years, Mac computers are susceptible to malware threats and attacks. In fact, from our analysis of malware in the last quarter of 2020, Mac malware outpaced various categories of Windows malware, such as adware. 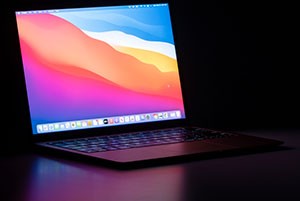 In the past, Macs were naturally not as vulnerable to malware attacks. It was always Windows PCs that were the main targets of hackers and those who spread malware threats. In recent years, the tables have turned where many Mac OS (Operating System) apps have become gateways for malware attacks.

A method that Mac malware gets loaded on a Mac computer is by tricking users into installing malicious apps, files, or potentially unwanted programs. Many of these malicious apps or borderline malicious programs are commonly called Scamware. Scamware apps will usually advertise other programs making claims that they perform certain useful functions when in fact they do not. Moreover, questionable web browser application extensions are loaded through third-party sources or downloads from questionable download sites. Such extensions may load and modify Internet settings causing sites that run malicious scripts to load and problems ensue.

The Mac OS still claims to be more stable and less prone to malware attacks than Windows. While that notion may ring true in many areas of certain malware types, such as Ransomware, Macs continue to be bombarded by new and emerging malware threats, even Ransomware.

Mac malware comes in all forms, similar to that of the popular threats that attack Windows PC.

According to 9to5 Mac, there have been about 30 million downloads of a specific Adware app called NewTab on Mac devices just in the year 2019. The NewTab app continues to be an annoyance for Mac computers where the deceptive app will infiltrate the Safari Web browser and is known to cause issues outside of Safari through deceptive propagation methods to spread.

AV-TEST, an independent IT-Security company, also revealed how Mac OS malware tripled in 2018 from the previous year alone, as demonstrated in their chart below. Furthermore, Mac malware continues on an upward trend through 2020 and into 2021 prompting computer security experts from trusted sources to sternly warn Mac computer users to take precautions and utilize antimalware tools made available to them.

The AV-TEST team is not the only one to provide research on Mac Malware trends. Atlas VPN partnered with AV-TEST to provide an in-depth analysis of Mac Malware behavior in 2020, with the forecast for 2021. Similar to what was mentioned above, the number of threats intended for macOS has only grown. In fact, investigators have found that, on average, throughout 2020, security products detected 1,847 new Mac threats a day.

Compare this to the full report of 2019 Mac Malware: 55,556 instances of Mac threats were detected in 2019, and the number skyrocketed to 674,273 in 2020. It means that just within a year, we saw a 1,092% increase in Mac Malware. Of course, Windows still remains the main playground for malware creators, and the Mac threats developments cannot even compare to the numbers we see in Windows malware reports, but the sheer increase in Mac infections clearly shows that malware developers find new ways to enter macOS, which has been deemed to be impenetrable for many years.

Also, creating malware has become easier, as a lot of things are now ready-made. If hackers and cybercriminals used to have to make everything from scratch before, these days, they can purchase malware codes that can be tweaked according to their liking. In other words, it is a lot easier to make a new threat, and you don’t even need extensive programming skills for that. 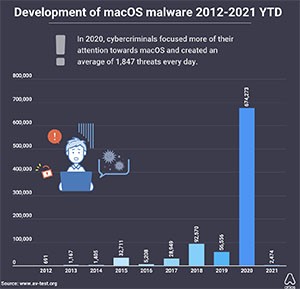 Depending on the types of threats that try to enter Mac, users may need to employ different tools to protect their devices. Since cybercriminals often trick users into installing scareware apps, users need to educate themselves about such issues. Learning how to discern a regular application and a fake installer is vital. For the most part, downloading apps only from reliable vendors should do the trick. Also, it is important to avoid clicking anything that pops up on your screen automatically.

For instance, when users visit websites that are full of pop-up ads, some of those ads could be part of adware or browser hijacker distribution system. Clicking them without any second thought could easily lead to installing a potentially unwanted application, a Trojan, and even a ransomware infection.

Thus, downloading programs that can be found in the App Store or are allowed by Apple is crucial. Getting apps from unreliable sources can lead to severe security issues because hackers always find a way to exploit software vulnerabilities. That was also the case with the biggest macOS hack in the first quarter of 2021. According to Forbes, cybercriminals developed malware that can be misclassified by Apple’s operating system. That allows the infection to bypass the usual Apple security checks and finally run on the system. But in order to get in, this infection has to convince the user to download it from unofficial sources. And that is why we implore, once again, that you should only get apps from official and reliable sources.

Aside from that, you must also update your macOS whenever a new system patch or update is available. Make sure you have the automatic update option on so that you would never miss your updates. Some users consider system updates an annoying nuisance, but you do not get just a refined interface or new icons with system updates; they also come with system patches that fix known vulnerabilities and make it harder for Mac Malware to enter your machine.

Mac computer users commonly don’t suspect being a victim to malware, mostly due to the old notion of Macs not being as susceptible to malware as a Windows PC. It is essential for those Mac computer users, especially, to be vigilant and take the necessary precautions or they may face the unfortunate danger of losing valuable data or normal usage of their Mac computer.

Surprisingly to most, there are many anti-malware and anti-virus resources available for Mac computers. SpyHunter for Mac is a powerful malware remediation and protection tool for Macs that is designed to provide Mac users with in-depth system security analysis, detection, and removal of a wide range of Mac malware threats, well as provide one-on-one tech support service.

There are currently 778 articles listed on mac malware.