The malware that calls itself Windows Restore is nothing more than the latest clone in a long line of fake PC optimization programs. Because this release of this malware is using a name that also refers to a legitimate Windows utility, there may be some confusion about what is malware and what is real software. The difference is that the fake Windows Restore costs money, whereas the real Windows Restore is just a part of Windows and requires no additional fees.

Please note that from this point on, all references to "Windows Restore" are to the malware, the fake defragmenter that holds your computer hostage.

You will not be able to click past the fake scanner, but it is possible to wait through it and eventually access the desktop. Unfortunately, being able to get to the desktop doesn't really do any good, because Windows Restore will interfere with your computer in so many different ways that you will not be able to do anything with it. In order to continue Windows Restore's campaign of scare tactics, Windows Restore will create pop-up alerts, which will pop-up almost constantly. The alerts usually start with "Critical error," and they will claim – without referencing Windows Restore, most of the time – that something has gone horribly wrong with your system's hardware. You'll see warnings that say that your hard drive couldn't be found, that the disk has bad sectors, that data couldn't be saved due to hard drive failure and that there are serious problems with the RAM.

Windows Restore falls into a category of malware typically referred to as rogue disk defragmenters or rogue system optimization tools, and Windows Restore is far from the first of its kind. Windows Restore is closely related to and derived from other fake security programs in this category, almost certainly created and distributed by the same people.

This family of malware has only been around since December 2010, and it already has all of these members, which means that new names are appearing frequently for what is essentially the same fake security software. Windows Restore appeared in early April 2011. Along with all of the malware in Windows Restore's family, Windows Restore is part of a scam that has been traced to an origin in Russia. 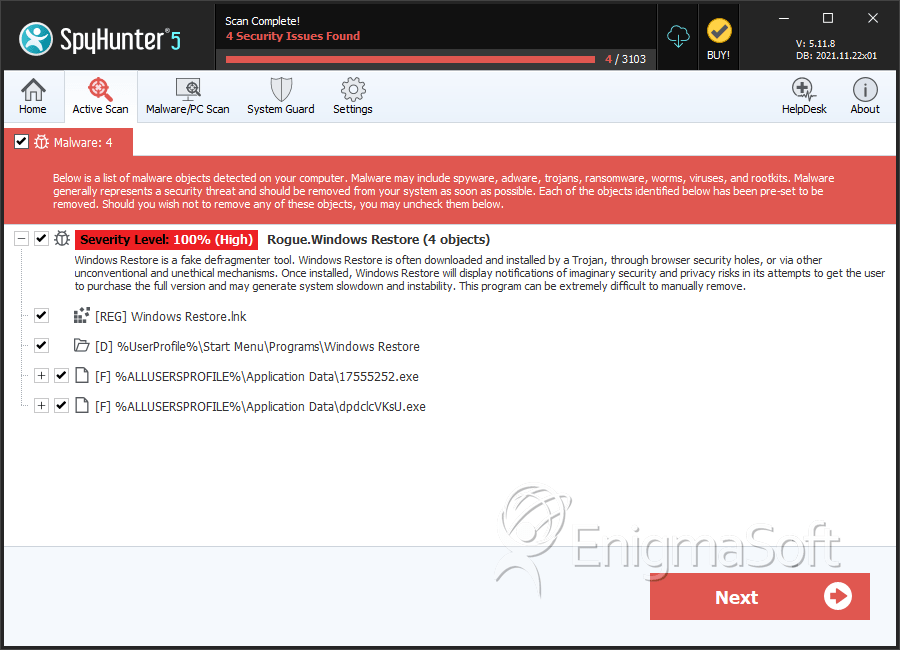 The following messages associated with Fake Windows Restore were found: