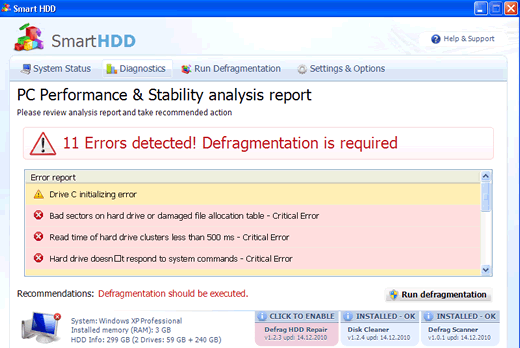 Smart HDD is a bogus defragmenter that has been around for a long time. Smart HDD is part of a scam that is not particularly sophisticated. At its core, rogue defragmenters are all practically the same in the way they attempt to scam their victims. Typically, Smart HDD will display numerous pop-up windows and error messages claiming that the victim's hard drive is failing. Then, it will refuse to repair these supposed problems unless the victim 'registers' Smart HDD. However, ESG analysts have detected that Smart HDD has absolutely no real defragmenting or system optimization capabilities. Because of this, you should absolutely not pay for this fake defragmenter application, which will usually attempt to charge anywhere from sixty to eighty dollars for a 'full version' of Smart HDD. If Smart HDD is installed on your hard drive, any problems on your hard drive are probably imaginary and part of the Smart HDD scam. To remove Smart HDD, ESG security analysts recommend using a dependable anti-malware application to run a full scan of your hard drives. You can stop some of Smart HDD's most annoying pop-up windows by entering either of these two registration codes:

Anyhow, it's worth been noted that these registration codes will not remove Smart HDD from your computer; they will simply stop Smart HDD from displaying pop-up windows and blocking access to your files with error messages. The Smart HDD infection still needs to be taken care of with a legitimate security program.

Smart HDD – An Old Threat with a New Face

Malware researchers are thoroughly acquainted with Smart HDD and its many clones. Smart HDD and its family of malware, the FakeSysDef family, have been around for several years, and most reliable security programs are able to remove Smart HDD. In March of 2012, ESG malware analysts detected that Smart HDD was updated with a new user interface. This GUI now display's Smart HDD's name as S.M.A.R.T. And uses a background gradient similar to the Windows 7 theme (the prior version of Smart HDD used an interface that was more similar to Windows XP). In the new version, you will also find several tabs in a menu bar, two of which claim to perform a S.M.A.R.T. Check and S.M.A.R.T. Repair. Regardless of its new face, Smart HDD is still a scam and should be removed immediately. 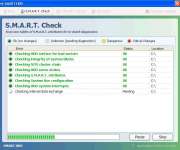 The following messages associated with Smart HDD were found:

You really make it seem really easy with your presentation in spite of this I in
finding this matter to be really one thing that I think Id by no
tactic understand. It kind of feels too complex and very huge for me.

I am searching ahead for the subsequent submit, I'll try to get the
hang of it!