U.S. Senators Claim Video-Sharing App 'TikTok' Might Be A Threat To National Security 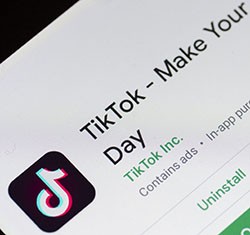 U.S. Senate Democratic Minority Leader Chuck Schumer and Republican Senator Tom Cotton have sent a letter to Director of National Intelligence, Joseph Maguire, expressing concerns about TikTok, a popular video-sharing app. According to the two senators, the Chinese-owned platform may pose a threat to national security through user data collection, or the censorship of content. Schumer and Cotton also suggested that the video-sharing platform could become targeted by foreign influence campaigns.

TikTok is owned by Bytedance Inc., a Beijing-based tech company, while concern about Chinese online censorship is becoming a hot topic. Schumer and Cotton wrote in their letter: "With over 110 million downloads in the U.S. alone, TikTok is a potential counterintelligence threat we cannot ignore." Republican Senator Marco Rubio has also asked U.S. authorities to review claims that the Chinese state might be using TikTok for political censorship.

TikTok user data could be link to National Security threat

The senators also expressed concern about a situation in which the Chinese government may force TikTok to turn over data for its U.S. users, including "user content and communications, IP address, location-related data, device identifiers, cookies, metadata, and other sensitive personal information." They elaborated: "Without an independent judiciary to review requests made by the Chinese government for data or other actions; there is no legal mechanism for Chinese companies to appeal if they disagree with a request.

"  ByteDance has already answered some of the concerns, saying that the TikTok app doesn't operate in China, and the Chinese government wouldn't have jurisdiction. A spokeswoman for the company told Reuters: "TikTok is committed to being a trusted and responsible corporate citizen in the U.S., which includes working with Congress and all relevant regulatory agencies.

"  The TikTok app is not available on the Chinese app store, and the website TikTok.com is also blocked. The company has added that: "TikTok does not operate in China, nor do we have any intention of doing so in the future.

"  Still, concerns about foreign influence in the upcoming election have stayed relatively high, despite the trouble Democrats have had in their attempts to prove a Russian cyber-influence campaign helped elect President Donald Trump in the 2016 elections, a claim that has been denied by both Moscow and the Trump administration.