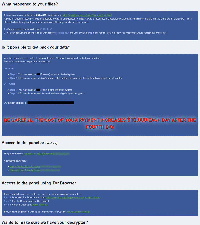 Yemen Got a RobinHood Too

'HELP YEMEN
Bin Salman of Saudi Arabia is Killing poor and innocent people of Yemen by bombing , creating famine and disease!
You as a Saudian or a Supporter of their activities, are partner of his homicide. So you have been subjected to a ransomware attack and must accept one of the following:
a) Giving up all your information
b) Pay five Bitcoins to help Yemeni people.
bitcoin address = 1ENn1BelaKXBotiGuAFE1Yrin3e3vBjUAQH
and send transaction link to: decrypter.files@gmx.com
c) Use Tweeter to condemn Bin Selman for his crimes and ask him to stop the war against Yemen and make 100 users to retweet.'

The figure of five Bitcoin demanded by the RobinHood Ransomware is currently close to $14000 USD, making it very unlikely that regular computer users will pay the ransom amount to recover their files. Additionally, there is no evidence that the con artists will use these ransom amounts to help the people of Yemen. In fact, PC security analysts have dealt with 'altruistic' ransomware before, which make similar claims that the ransom amount will be used for charity or for a noble goal, when in fact there is no difference between the RobinHood Ransomware and other ransomware attacks.

Dealing with the RobinHood Ransomware Infection

Malware researchers have managed to reverse engineer one of the scarcely available samples of RobinHood ransomware, and their analysis has revealed some interesting features. Upon execution, the malware uses a specific command to disconnect all network shares from the infected computer, meaning that other computers from the same network are not encrypted via connected shares. Rather, RobinHood targets each machine individually, which indicates that the attackers push the malicious payload to each individual computer through a domain controller or a framework like EmpirePowerShell or PSExec. Then, the malware attempts to read an RSA encryption key from the Windows Temporary folder.

If it is unable to find such key, RobinHood displays a message that the system cannot find the specified file and then quits its execution. If the searched key is present, however, the ransomware continues with the file encryption. As a next step, the malware quits 181 Windows services related to database, antivirus, and mail server programs, as well as to any other software that could keep files open and prevent their encryption. Next, during this preparation phase, RobinHood clears event logs, Shadow Volume Copies and disables the Windows automatic repair function.

After everything is ready, RobinHood starts the actual encryption, creating an AES key for each file. Then, the AES key is locked up, while the original file name is encrypted with the public RSA key and altered to “Encrypted_[randomstring].enc_robbinhood” (for example: Encrypted_b0a6c73e3e434b63.enc_robinhood“). This ransomware skips files in certain directories, like Program Data, Windows, Boot, Temp, Program Files, tmp, AppData, System Volume Information, and others. Another uncommon feature of RobinHood is that it creates numerous log files named “rf_s,” “ ro_l,” and “ro_s” in the C:\Windows\Temp folder, which are deleted after encryption is complete. The “rf_s” file logs the creation of ransom notes in each folder, however, the purpose of the other log files is not known yet. In some cases, a final message “Done, Enjoy buddy:)))” appears to indicate that encryption has been completed.

During the encryption process, the ransomware creates four different ransom notes named “_Help_Help_Help.html,” ” _Decrypt_Files.html,” “ _Help_Important.html,” and “_Decryption_ReadMe.html.” These ransom notes inform the victim about what has happened to their files and state the Bitcoin address that should be used to make the ransom payment. The latest variants of RobinHood demand 3 Bitcoin for the decryption of one affected system, and 13 Bitcoin for the entire network. Some of the older variants demanded 7 Bitcoin for all affected systems.

There are also reports which claim that some RobinHood samples threaten to impose a $10,000 penalty per day to victims who do not pay, starting from the fourth day of encryption. Another interesting detail that is not observed in many ransomware threats out there is a surprising claim made by its creators. They state they value the victim’s privacy and would delete all data related to a particular user, like IP addresses or encryption keys, as soon as the ransom payment has been made. Also, RobinHood’s contact page says that ransom payments cannot be tracked as an individual Bitcoin address is set up freshly for each victim. The attackers insist on honesty as well - they offer to decrypt three files of up to 10 MB for free. 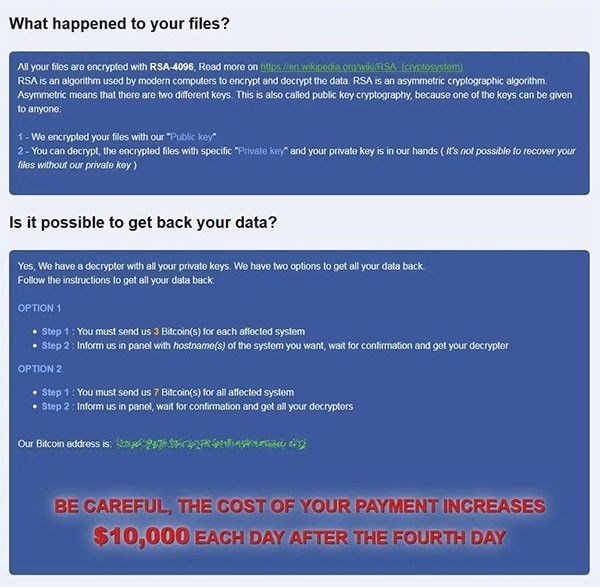 One of the known major attacks of RobinHood happened on May 7, 2019, when Baltimore’s city government got paralyzed for weeks. News agencies reported at that time that the servers of the city’s administration had been breached by a hacking tool developed by the National Security Agency which had landed in the hands of cybercriminals. Later, it was confirmed that the incident was caused by RobinHood Ransomware.

As a result of the attack, the city’s entire digital content had been locked so that the government emails were down, no real estate transactions could be processed, and no payments to city departments could be made online. Baltimore City Mayor stated that the city would not pay the demanded ransom of 13 Bitcoin (equal to $100,000), while the FBI and the Secret Service started an investigation. Another RobinHood attack affected the network of the City of Greenwell, North Carolina in April 2019. Responsible law authorities and cybersecurity experts are currently working on that case as well.

Recently, the RobinHood ransomware family was observed using an encryption strategy that isn't hindered by endpoint protection software. The threat actors behind RobinHood managed to subvert a setting in kernel memory in Windows 7, 8, and 10 to achieve it.
The module that the actors are using to kill encountered endpoint protection software consists of several files, all embedded into STEEL.EXE. The files are extracted to C:\WINDOWS\TEMP.

The STEEL.EXE application is the one killing processes and deleting files of installed security applications. To make that possible, STEEL.EXE deploys its driver. The driver runs in kernel mode, making it ideally positioned to take on processes and files without being caught by endpoint protection and security controls. Although endpoint security products run under NT AUTHORITY/SYSTEM, most of them are running in userspace.

The STEEL.EXE application deploys ROBNR.EXE, which in turn installs RBNL.SYS, the malicious unsigned driver that comes with the malware. Once the driver is installed, STEEL.EXE reads from the PLIST.TXT file and sends instructions to the driver. That deletes any of the applications listed within, essentially killing the processes. If the process is running as a service, the service is blocked from automatically restarting, as the file gets deleted.

Once STEEL.EXE exits, the ransomware may perform an encryption attack without any issues, since the security applications on the device are taken out for good, giving itself free rein.

This application is dropped on the disk when STEEL.EXE is present. That is an application that cuts and installs the vulnerable driver GDRV.SYS, as well as the malicious RBNL.SYS driver. 64 bit Windows devices have a mechanism that enforces driver signatures, meaning Windows only allows drivers to load when both Microsoft and the manufacturer signed them. That is necessary for all drivers so they can be loaded on 64 bit Windows machines.

The malware authors didn't care to sign the malicious driver since that involves a purchasing certificate. Such certificates may be revoked by the certificate authority, making the driver irrelevant, as it cannot be accepted by Windows anymore.

The malware authors went with a different tactic, using the properly signed third party driver GDRV.SYS, as it contains a privilege escalation vulnerability. That allows it to read and write arbitrary memory. The threat actors used that to abuse the vulnerability, temporarily disabling driver signature enforcement in Windows within the kernel memory. Once that's done, the attackers get their foot in the door and load their malicious, unsigned driver.

By GoldSparrow in Ransomware
Translate To: Chinese (Simplified) Chinese (Traditional)