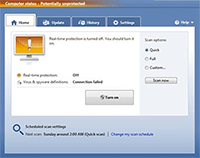 What Internet Defender Really is and its Symptoms

After you wait through the fake scan process and clear the Internet Defender home screen, Internet Defender will continue to try to scare you by generating pop-up alerts. These alerts are elaborate, and they include the Windows logo and other graphics, and the windows they appear in will usually be titled “Internet Defender Firewall Alert.” Some of the alerts will claim that a keylogger is being used to infiltrate a social networking account that you hold, and others will claim that several serious threats have been detected on the system. You will get buttons with options to perform the “recommended” action and activate Internet Defender to remove the threats or to continue unprotected, and the “continue unprotected” options are always accompanied by some scary-sounding warnings about the high risk inherent in doing so. Ultimately, if you agree to perform the “recommended” action in response to these alerts, you wind up at the payment page for the scam.

By ZulaZuza in Rogue Anti-Virus Program
Translate To: Português