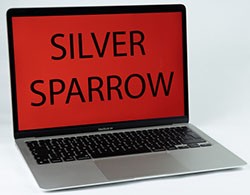 The Silver Sparrow Malware is a Trojan downloader that downloads and installs additional threats without the user's consent. It's compatible with macOS systems, including both M1 processor-based hardware and older Intel x86 ones. Users should respond to infections by disabling their Internet connections and removing the Silver Sparrow Malware as soon as possible with any appropriate anti-malware solution.

After the recent campaign of the Pirrit adware variant, GoSearch22, customers upgrading their Mac hardware are encountering security troubles coming out of the gate. The supposed security benefits of M1 processors, while an apparent improvement over older Intel models, is far from impenetrable. The Silver Sparrow Malware is the second attempt at piercing these defenses and one more overtly hostile than advertising software.

Although malware experts see evidence of the Silver Sparrow Malware's development going back to last year, its campaign's final payload still is unknown. The Trojan uses JavaScript, instead of more-traditional pre or post-installation scripts, as part of its obfuscation efforts, and Amazon cloud services for C&C infrastructure. There also are at least two versions of the Silver Sparrow Malware: one for M1 processor architecture and one for Intel x86.

The Trojan contacts its C&C server on an hourly basis along with also reporting the initial installation's success. Presumably, the threat actor will eventually provide more downloadable components for the Silver Sparrow Malware, such as adware, spyware, or a more comprehensive backdoor Trojan. Of course, these downloads and file executions require no permission from the user and occur as hidden background processes.

Malware experts also recommend against spotting the Silver Sparrow Malware installations as a substitution for comprehensive protection through security solutions However, there are some processes associated with the Silver Sparrow Malware and similar threats. The 'curl,' 'sqlite3,' and 'PlistBuddy' processes are known factors, with the latter two including additional command-line arguments.