PC security researchers received reports of a NM4 Ransomware attack, a variant of the R Ransomware and the NMoreira Ransomware, both ransomware Trojans that carry out a fairly typical variant of this hoax. The NM4 Ransomware is being distributed through the use of spam email attachments. Ransomware campaigns like the NM4 Ransomware and associated threats created by the same hacking group that developed the NM4 Ransomware are being delivered to victims by exploiting exposed Remote Desktop Protocol connections on the Internet directly. This method of delivery may be used to compromise computers belonging to small and medium businesses, as well as Web servers and corporate networks.

The NM4 Ransomware is an Updated Version of the NMoreira Ransomware

'Your Key: [RANDOM CHARACTERS]'
Encrypted files!
All your files are encrypted using AES256-bit encryption and RSA-2048-bit encryption.
Making it impossible to recover files without the correct private key.
If you are interested in getting is the key and recover your files
You should proceed with the following steps.
The only way to decrypt your files safely is to buy the Descrypt and Private Key software.
Any attempts to restore your files with the third-party software will be fatal for your files!
To proceed with the purchase you must access one of the link below
[LINKS TO TOR-BASED PAGES]'

Dealing with a NM4 Ransomware Attack

Unfortunately, it may not be possible to recover the files affected by the NM4 Ransomware attack currently. The ransom amount associated with the NM4 Ransomware is quite high: 3 BitCoins (approximately $3900 USD at the current exchange rate). Computer users should refrain from paying the NM4 Ransomware's ransom. Apart from the fact that it is quite a lot of money, the people responsible for these attacks may ignore payment, demand additional payments or reinfect the victim's computer. Furthermore, paying these ransoms finances the activities of the extortionists, allowing them to continue creating and developing threats like the NM4 Ransomware and their variants. Instead, ensure that you are protected against these attacks. The best protection against ransomware Trojans is to have file backups on an external memory device or the cloud (on a system that is not synchronized with the main computer). Having the power to restore the affected files from a backup copy quickly and easily nullifies the con artists' attack completely, allowing computer users to be protected from the NM4 Ransomware and similar threats. 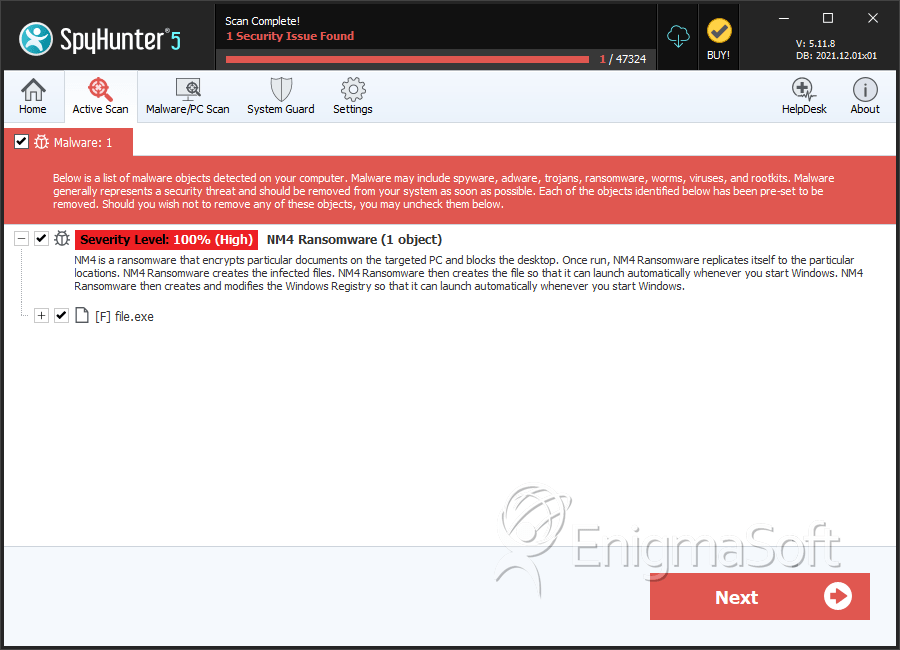 NM4 Ransomware creates the following file(s):
Expand All | Collapse All
Your comment is awaiting moderation.
Please verify that you are not a robot.