By GoldSparrow in Rootkits
Translate To:
English
English Português

Mebroot is a rootkit that has been active since at least 2008. Mebroot is extremely threatening because Mebroot modifies and replaces the Master Boot Record or MBR on the infected computer. This makes it very difficult for standard security software to detect or remove Mebroot. Once installed, Mebroot creates a backdoor into the infected computer which Mebroot uses to relay banking information to a third-party. Mebroot is a sophisticated threat infection that is difficult to remove or deal with. Malware analysts consider Mebroot a high-level threat that poses a significant risk to computers and computer users' financial information.

How Mebroot may be Installed on a Computer

Mebroot may be distributed using a variety of methods, including attack websites and social engineering strategies. The Mebroot installer may modify the MBR to ensure that Mebroot starts up as soon as the infected computer boots. There have been many versions of Mebroot, each using different methods to write directly to the MBR. Early versions of Mebroot are no longer functional since Windows security updates have patched many vulnerabilities that Mebroot was using before. However, the developers of this threat continue to create new ways for Mebroot to infect computers, resulting in an arms race with threat developers on one side and legitimate software developers and security researchers on the other.

How a Mebroot Infection Works

Once the infected computer is booted, Mebroot loads itself into the memory and then hooks into essential functions on the affected computer. Mebroot starts up before Windows itself. Once Mebroot is initialized, Mebroot returns control to the unaffected MBR so that Windows can start as normal. Windows starts up as if Mebroot were not present. However, Mebroot may be able to intercept all data read or written on the affected drive. This means that security software installed on the Windows operating system may not be able to detect Mebroot's presence, since it operates on an entirely different level. To deal with threats like Mebroot, computer users may need to use specialized anti-rootkit tools or advanced, reputable security programs that have anti-rootkit functionality.

The Purpose of Banking Trojans such as Mebroot

The main purpose of Mebroot is to collect banking information from the infected computer. Mebroot resides silently on the victim's computer, allowing a third party to monitor all activities by the affected computer user. Using Mebroot, third parties may gain full access to the infected computer and even control it from a remote location. More importantly, Mebroot's backdoor allows this threat infection to send and receive information, such as crucial data about the victim's computer.

Banking Trojans are among the most threatening forms of threats. Mebroot is a particularly threatening banking Trojan because of its rootkit functionality. This feature makes Mebroot especially difficult to detect or remove. Unfortunately, Mebroot may be used to install other threats on the victim's computer. Mebroot may be used along with other banking Trojans or other components (such as keyloggers or information-collecting Trojans) to collect data from the victim's computer. One of the main problems resulting from a Mebroot infection is the fact that its rootkit functionality doesn't only protect Mebroot; this Trojan infection may use its rootkit functions to protect other threats on the victim's computer from detection or removal. If you suspect that Mebroot is installed on your computer, you should remove this threat immediately. 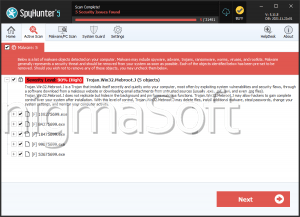 Trojans
September 21, 2011
Win32.Mebroot.J is a terrible Trojan which can download and install additional malware threats from the Internet. Win32.Mebroot.J can use a large amount of your system resources to trace your...

Trojans
March 29, 2009
Mebroot N is another version of the Trojan.Mebroot infection, and is very difficult to detect and remove without the aid of a spyware removal tool. Mebroot N, much like its counterpart, installs a...