The QuasarRAT is a Trojan that is a heavily modified version of the open-source project carrying the same name "QuasarRAT" by a programmer dubbed 'quasar' who has a page on Github.com/quasar/QuasarRAT. The QuasarRAT software is promoted as a Remote Administration Tool (RAT) for server admins and cyber security managers in the government and private sector. The clean and corrupt versions of QuasarRAT differ in how they are packed, the presence of an obfuscation layer and manner of network communication. The QuasarRAT or Quasar Remote Access Trojan was used in targeted attacks on the government of the United States of America in early 2017 and samples of the malware surfaced in October 2017 with new attacks being recorded. It is not clear who is behind the QuasarRAT threat, but its attack vector appears to remains the same.

That is not the full range of operations the remote user can perform. Malware investigators add that the QuasarRAT operators could download files, edit the Registry, open remote desktop connections, collect passwords, load Web pages, issue commands to the keyboard and mouse. Cybersecurity experts discovered that the QuasarRAT threat exhibits vulnerabilities regarding the client-server communication. The vulnerabilities could be exploited and allow the infected PC user to launch a counterattack and install a copy of QuasarRAT on the 'Command and Control' servers used by the first attacker potentially. It is not a good idea to remove the QuasarRAT manually and attempt counterattacks if you are not a computer security expert with experience under your belt. Regular PC users are encouraged to use a reputable anti-malware solution to eliminate the QuasarRAT and block unauthorized connections to the system. 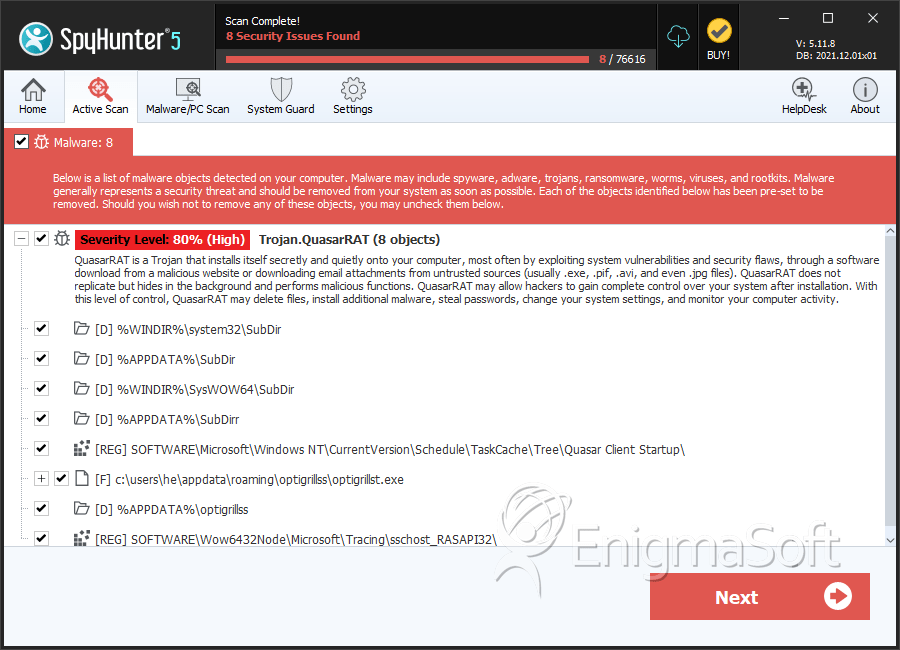 QuasarRAT creates the following file(s):
Expand All | Collapse All