How the Napoleon Ransomware Attack Works

The Napoleon Ransomware renames the files it encrypts, via the addition of the following extension to the file's name:

'Your documents, photos, databases and other important files have been encrypted
cryptographically strong, without the original key recovery is impossible!
To decrypt your files you need to buy the special software - NAPOLEON DECRYPTER
Using another tools could corrupt your files, in case of using third party
software we don't give guarantees that full recovery is possible so use it on
your own risk.

If you want to restore files, write us to the e-mail: supp01@airmail.cc
In subject line write encryption and attach your ID in body of your message
also attach to email 3 crypted files. (files have to be less than 2 MB)
It is in your interest to respond as soon as possible to ensure the restoration
of your files, because we wont keep your decryption keys at our server more than
one week in interest of our security.
Only in case you do not receive a response from the first email address
withit 48 hours, please use this alternative email adress: supportdecrypt2@cock.li'

Unfortunately, despite the fact that the Napoleon Ransomware is clearly the work of amateurs and is not sophisticated particularly, the files encrypted by the Napoleon Ransomware are not recoverable without the decryption key. Because of this, it is important to take preventive measures to ensure that you have file backups on removable devices. The people behind the Napoleon Ransomware attack shouldn't be contacted, and the affected computer users shouldn't attempt to pay the ransom amount. Apart from the fact that this allows cybercrooks to continue financing these attacks, it also is very unlikely that the cybercrooks will help victims recover after the payment is made; they are just as likely to ignore the payment or demand a higher ransom. 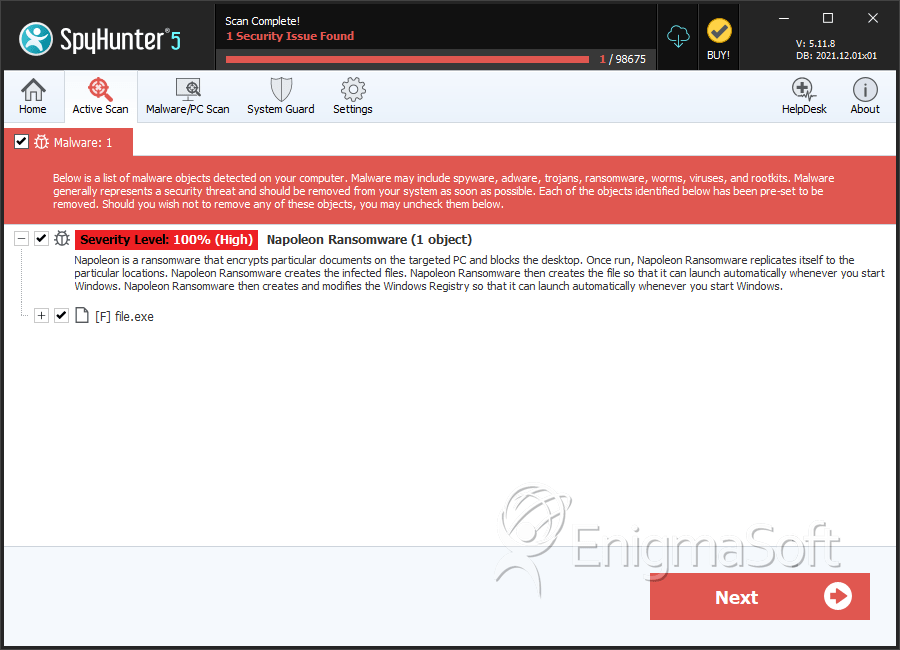 Napoleon Ransomware creates the following file(s):
Expand All | Collapse All
Your comment is awaiting moderation.
Please verify that you are not a robot.