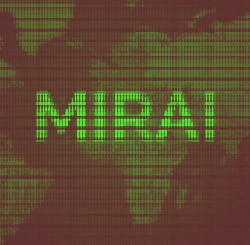 The Mirai Botnet is an extensive network of compromised network routers that emerged in 2017. The Mirai Botnet connects devices powered by ARC processors and allows threat actors to launch various types of DDoS (Distributed Denial of Service) attacks on targeted servers, sites and media platforms. The Mirai Botnet malware is known to affect DVRs, CC cameras, smoke detectors, wireless door openers and thermostats. The Mirai Botnet is perceived as a significant threat to insecure IoT (Internet of Things) networks since it uses a list of default access credentials to compromise poorly configured IoT devices. The Mirai Botnet is designed to scan a wide range of IP addresses and attempt to establish a connection via ports used by the Telnet service. The Telnet protocol allows authorized users to connect from one device to another as long as they are on the same network.

Compromised devices run a barebones version of Linux and can run lightweight programs like proxies, Web scanners and DDoS applications. Extensive analysis of the Mirai Botnet showed that the Mirai Botnet is used for offering DDoS power to third parties. The programmers behind Mirai Botnet can use their network to overflow targeted servers with data packets and prevent Web surfers from accessing targeted platforms. Also, the Mirai Botnet can be used to send spam and hide the Web traffic of other cybercriminals. The data packets of threat actors can be bounced through several 'nodes' in the Mirai Botnet and hide the origin of the threat actor. The Mirai Botnet proved a lucrative endeavor until its creators were arrested and charged with cybercrime activity towards the end of 2017. However, the source code for the Mirai Botnet was leaked to the open Web, and that allowed many other threat groups to develop their modified variants of Mirai in the coming years. More prominent variants of Mirai include the Satori Botnet, the Hajime Botnet and the Persirai Botnet. Removing the Mirai malware may prove difficult for regular PC users, and using a reputable anti-malware solution is highly recommended.

Since the emergence of the Mirai Botnet it has evolved greatly. New samples of the aggressive malware have been found that look to run on new processors and infrastructures. Just during the year 2019, Mirai has managed to allow attackers to utilize its newer variations to expand targets to newer devices that primarily utilize a set of processors. The processors that Mirai targeted at the time are ones in the family of OpenRISC, Xilinx MicroBlaze, Tensilica Xtensa, and Altera Nois II. Among such processors, systems that utilize the specific architecture were found to have exploits taken advantage of by forms of Mirai.

Ultimately, by Mirai being further developed to attack other processors on different machines, it effectively is able to spread its wings where it propagates onto many more systems to target additional users. The source code of Mirai has also expanded during its lifetime to inject exploits that target equipment from Realtek, Huawei, and even Netgear furthering the spread of Mirai. Even so, Mirai has had its source code shared and published on hack forums and other sources allowing it to be open source and readily available to any hacker to exploit.

Many of the recent discoveries of Mirai in the year 2019 were made by Palo Alto Networks, doing their due diligence to expose Mirai and attempt to warn antimalware sources of Mirai's broader reach. Being a self-propagating botnet has enabled Mirai to attack IoT devices on a new scale that allows massive DDoS attacks that could cause impactful damages. In all, a newer version of Mirai could essentially execute over 650 Gbps of data in a DDoS attack reaching hundreds of thousands of devices all in one sweep. Such attacks basically bring servers to their knees where they are no longer able to operate and could have damage that requires webmasters and engineers additional time to resolve versus in past cases of common DDoS attacks.

As time progresses, so does the likelihood of Mirai being exploited in new ways to continue on a path of utter destruction that may be mitigated by proactive protection measures, such as utilizing aggressive antimalware resources or robust server and network anti-infiltration methods. Not only will server admins be on the lookout for Mirai, but personal computer users will want to take the necessary precautions to reduce the attack from Mirai.

Botnets
December 10, 2021
Despite the Mirai botnet being shut down years ago, its legacy continues to live on. After the release of the botnet's source code, many cybercriminals used it as a basis to create their own versions of the malware. One of the offshoots of Mirai that is still active is tracked by the infosec community as the Dark Mirai (aka MANGA). And according to the researchers at Fortinet who are monitoring...