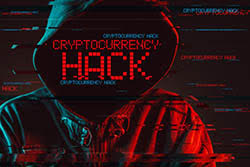 We are currently seeing the next generation of disruptive ransomware and malware sweeping across the globe as hackers further evolve and innovate to follow the global cash reserves. The cryptojacking craze has become a new cash cow for cybercrooks who look to exploit vulnerable computers only to use them as virtual zombies to mine cryptocurrencies. Naturally, with the popularity surrounding cryptocurrencies at an all-time high, hackers and cyber crooks are looking to cash in big by taking advantage of infected computers.

Hackers are extorting people from all over the world who are now directing their personal cash into the cryptocurrency mania in the billions of dollars. According to Lex Sekolin, global direct of fintech strategy at Autonomous Research LLP, hackers have made off with over $1.2 billion worth of Bitcoin and Ethereum cryptocurrencies just in the last decade. Many of the victims are unsuspecting ordinary people who fall for the vicious claims made by many ransomware threats of decrypting files after locking down an infected computer. Hackers are more poised than ever to leverage the global hype surrounding cryptocurrency and quickly cash in for fast monetary gains at the expense of victimized computer users.

Based on a multitude of previous ransomware infections, we have seen a deluge of attacks coming to the surface that the world has never seen, which prey exclusively on cryptocurrencies. Monero or Ethereum cryptocurrencies are among the types of cryptocurrency that cybercrooks are mining in mass volumes and their customers completely cleaned out by ransomware and malware makers. Many recent attacks, such as ransomware threats like Thanatos and WannaCry, or the variations of malicious script-based injections used to mine cryptocurrency, like Deepminer and Coinhive Cryptojacking, are among a growing compromising software supply chain. Many of these examples are just a few variations of ransomware and malicious mining scripts that we have seen to aggressively leverage Monero, Ethereum, and even Bitcoin cryptocurrencies.

Websites currently found to run the cryptocurrency mining scripts have been numbered in the tens of thousands, according to a February 2017 Bad Packets Report relying on the PublicWWW search engine source-code. While the Coinhive JavaScript malware was one of the primary threats to attack computers from laced websites, there are many other emerging threats that have taken on a life of their own. The chart below, from the Bad Packets Report cryptojacking malware report, gives us a glimpse of how many websites are running various iterations of cryptocurrency-mining malware apart from the popularized Coinhive JavaScript miner threat. 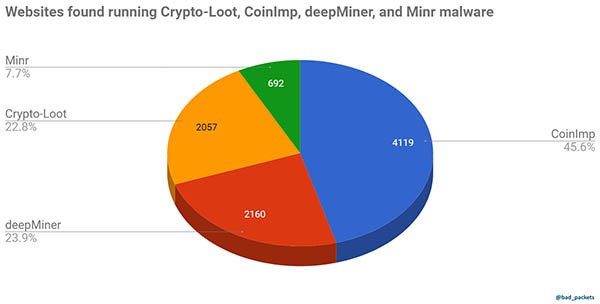 Cybercrime gangs from the Russian Federation and China are collaborating and plotting their next attack by using complex Blockchain penetration methods and sending digital keys to open the vaults. Earlier this year, a Russian-Ukrainian cybercrime gang was arrested in Spain where they allegedly used Bitcoin to launder upwards of $1.2 billion, according to Europol and the Spanish police. There are also variations of ransomware that have come out of China to specifically attack Chinese computer users, such as the ChinaYunLong Ransomware, which also engages in the same cryptocurrency ransom demands of countless other ransomware threats.

Cybercriminals hang out in jurisdictions that do not have extradition laws and therefore are virtually untouchable. In the past, U.S. government administrations would simply shame countries that shielded cybercriminals. Though, countries like Iran prove to be a safe haven for some hackers who actively victimize computer users from all over the world. Because cryptocurrency is untraceable, there is no reprieve to the lost millions of dollars out of the pockets of victimized computer users. Cybercriminals are leveraging from third world exchanges to distribute their hauls where there is no law enforcement.

The Aftermath and Irreparable Damage Mounts

Imagine Pablo Escobar in the form of a cybercriminal, with currently no borders or authorities to answer too? Unfortunately, the Hollywood scenario is a new reality that has laid out a path of utter destruction and irreparable damage. Now, we all face this stark realization that we could lose every bit of our digital money. Moreover, our valuable files can be literally siphoned from our crypto accounts and computers where they disappear into an oblivion without a trace. In the end, all we're left with is a computer displaying a ransom notice demanding us to pay up or lose it all of our stored data.