Antivirus 10 is a fake anti-virus application that is used to scare inexperienced computer users. Although Antivirus 10 looks like an anti-virus program, it is a Trojan designed to trick computer users into paying for its services. These programs, known as rogue anti-malware applications, are a common tactic that has been around for more than a decade. Antivirus 10 does not have the capacity to detect or remove threats. All notifications and 'scan results' from Antivirus 10 should be ignored. Antivirus 10 itself should be removed with a real security program that is fully up-to-date.

Antivirus 10 is Another Attempt to Trick Computer Users

System Alert
Malware has been detected on your computer. Click here to protect your PC with Antivirus 10

System Information
Antivirus10 has found viruses on your computer. It is recommended to disinfect files as soon as possible.

Apart from these bogus security warnings, Antivirus 10 will stop other software from running. For example, Antivirus 10 will terminate Notepad, most Web browsers, the Windows Task Manager, and other programs, displaying a message claiming that the program was 'infected.' This is a further attempt to scare the computer user into believing that the computer is severely infected. Below is an example of the type of message that pops up when Antivirus 10 blocks the Google Chrome Web browser:

'Warning
This app has been blocked for your protection.
Windows has blocked the execution of this application to prevent further infections on your PC. Program name: chrome.exe
Publisher: Google Inc
Status: Infected'

Antivirus 10 is Designed to Interfere with the Victim's Web Browser

Apart from preventing computer users from using their software, Antivirus 10 will randomly open websites like Porntube.com or Viagra.com on Internet Explorer to display pop-up messages and embarrassing content on the victim's computer. When Antivirus 10 does this, it will display one of the following pop-up messages:

'System Warning
Attention! The security of your computer has been compromised! Microsoft Windows files are now corrupted. Malicious software, which can lead to irreversible damages to your hard drive have been found on your system! The destruction of important files in C:\\WINDOWS could lead to data loss, system errors and hard drive failure! Click YES to remove malicious software and protect your PC. (Recommended)

System Danager
Warning! Windows has detected virus infection! Somebody is trying to get access to your system files and steal your passwords! Prevent identity theft and remove viruses now (highly recommended)'

Antivirus 10 also will try to convince the victim to pay for Antivirus 10 by displaying the following pop-up window:

The most common way of distributing Antivirus 10 is through the use of corrupted spam email attachments. These will typically try to trick computer users using some social engineering tactic, such as pretending that the email attachment is a bank invoice or shipping confirmation. Computer users can prevent Antivirus 10 from being installed by using a real security program that is fully up-to-date to protect their computers in real time. 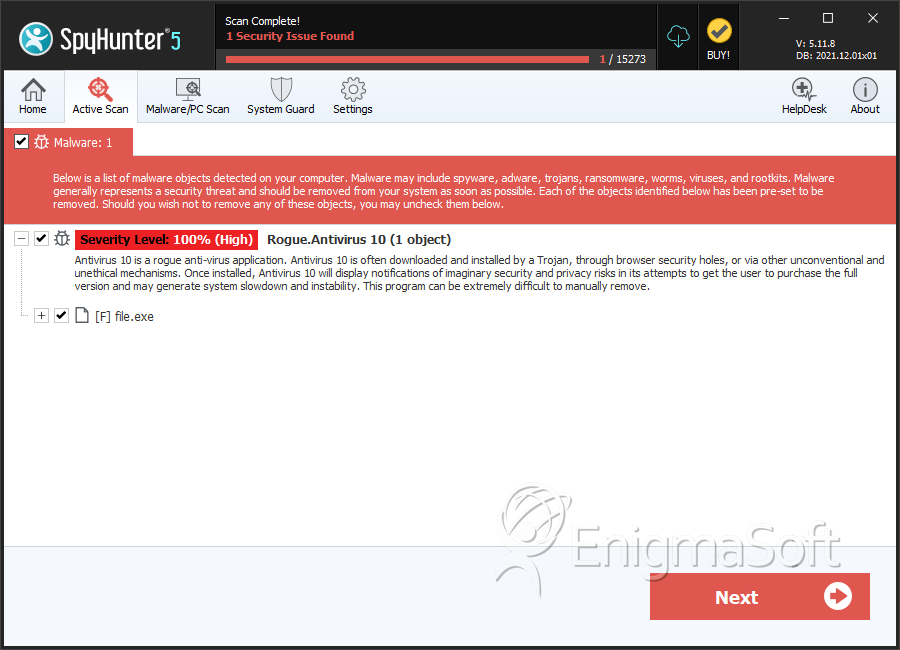 Antivirus 10 creates the following file(s):
Expand All | Collapse All

The following messages associated with Antivirus 10 were found: