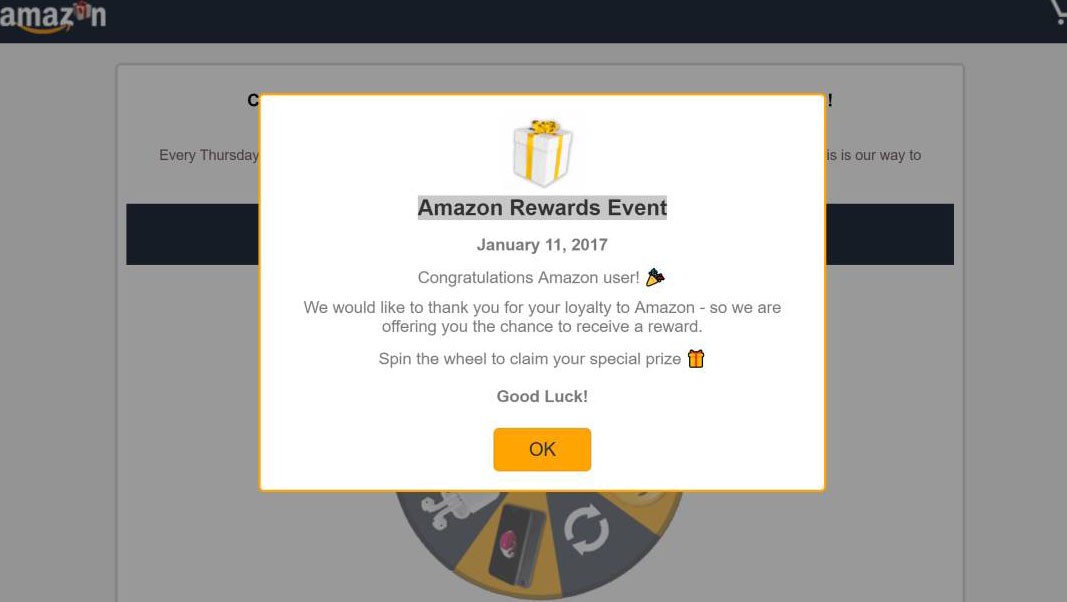 The 'Amazon Loyalty Program' pop-up scam is a fake survey disseminated by deceitful websites. The fraudsters try to trick users into thinking that the presented survey is being sent by Apple, but the tech giant has absolutely no connection to this misleading campaign. The goal of the people behind the 'Amazon Loyalty Program' pop-up scam is to obtain information from the users. As bait, they promise some grand prize, a brand-new iPhone 11 Pro in this case. As part of completing the survey, however, the page will demand that users input personal information such as name, address, age, gender, email address, credit card, or banking details, etc. The provided information will be logged and then misused in a variety of ways from the fraudsters.

Another popular scenario is to ask the people who have completed the fake survey to pay a transfer or delivery fee, processing charges, or something similar to receive the promised prize. All the money that will be appropriated by the fraudsters and users will be left waiting for a non-existent package. It goes without saying that users should be extremely careful when dealing with offers that sound too good to be true. It must also be noted that people do not usually land on pages for tactics such as the 'Amazon Loyalty Program' pop-up scam willingly. The redirects can be caused either by a previously visited website or an adware application lurking inside the computer. In the latter case, it is strongly recommended to perform a scan with a reputable anti-malware solution and then delete all suspicious applications that have been detected.

How To Uninstall Popcorn Time

Issue
May 18, 2021 37
Popcorn Time is a free application that integrates the functionality of a BitTorrent client with that of a media player. Users can download and run Popcorn Time on all of the major platforms such...

Browser Hijackers
December 21, 2022 29
The High Performance Gate Virus is an unsafe program that affects the Chrome and Firefox Web browsers and has been designed to infiltrate, exploit and collect information from targeted computers....

How to Find and Remove Adware from an Android Phone

Computer Security
January 17, 2019 29
People often think of malware primarily as a threat to desktop computers. However, your Android phone is just as susceptible to malware attacks as your home or office computer. A significant portion of the malware that affects Android as a platform happens to be adware. In fact, adware was the third most common malware infection affecting mobile devices in the second half of 2018. If your...

Adware
June 15, 2015 338,837 2
The DNS Unlocker is adware that has caught the attention of PC security researchers. Many computer users have been using programs like the DNS Unlocker to bypass region-locking components in online...

Rogue Anti-Spyware Program
August 22, 2013 333,244 5
Antivirus Security Pro is a rogue security application that belongs to a large family of rogue security software known as . Antivirus Security Pro is a fake security program that is disguised as a...
Loading...
Enigmasoftware.com uses cookies to provide you with a better browsing experience and analyze how users navigate and utilize the Site. By using this Site or clicking on "OK", you consent to the use of cookies. Learn more.