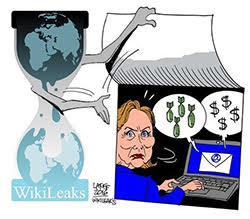 As the election season heats up and the Democratic National Committee (DNC) convention races off to a start, there are many issues in motion starting with the fact that WikiLeaks as unwillingly released sensitive information of DNC donors.

The data leaked by WikiLeaks contains full names, addresses, phone numbers, social security numbers, passport IDs, and other personal data of Democratic party donors. In the string of attacks conducted by a Russian hacker, the DNC data was among a good-sized list of emails stolen and later consumed by WikiLeaks.

Hackers were able to compromise data from the DNC just after the discovery of an attack on a DNC server in April 2016. At the time, an investigation ousted hackers responsible for the malware used in the attack, who are part of Russian cyber-espionage groups, Cozy Bear and Fancy Bear. The hacker who ultimately waged the attack was identified as Guccifer 2.0, a Romanian that dumped files from the DNC servers in intervals and eventually relinquished the data to WikiLeaks.

Since WikiLeaks' collection of DNC data, the Julian Assange media organization promised to leak the data at a later date, which is now.

Instead of vetting the DNC data or coming out to claim that the data was legitimate personal information of Democratic donors, WikiLeaks went ahead and unwillingly leaked all that they had. In making such a mistake WikiLeaks has put a major damper on the start to the DNC's convention this week as donors will need to sift through the leaked data and potentially invest in identity theft protection services to safeguard themselves.

With the recent DNC hack and leak of personal information by WikiLeaks, DNC chairwoman Debbie Wasserman-Schultz announced plans to resign due to the fallout of data leaked. No doubt that the WikiLeaks leak of data, whether it was intentional or a mistake, has caused a significant disrupt within the Democratic party. Moreover, this week's DNC convention will undoubtedly have a looming shadow cast over it due to the massive data leak and Wasserman-Schultz' resignation announcement.

Fortunately, for the RNC, there may be some light at the end of the tunnel as the media takes the recent data leak events and spin them in ways that give Donald Trump an advantage over Hillary Clinton. Either way, the current state of the RNC and DNC is evidence of how data severe data leaks can be on either side.