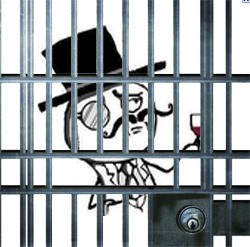 The recent efforts of federal officials from the U.S. (FBI), UK and Netherlands have resulted in the apprehension of 20 suspects who have been accused of participating in illegal hacker activities.

Members of the famous LulzSec hacker group, and individuals who identify themselves as 'Anonymous', face charges for allegedly helping to coordinate hacker attacks. These attacks bombarded PayPal servers in support of Wikileaks and initiated hackings against the website of InfraGard, an affiliated FBI information security organization.

Out of the total of 20 suspects apprehended, 16 of them where across the U.S. facing charges for a cyber attack on PayPal's website. 14 of these individuals were arrested in the states of Alabama, Arizona, California, Colorado, the District of Columbia, Florida, Massachusetts, Nevada, New Mexico and Ohio. Two others were brought up on charges filed in the Middle District of Florida and the District of New Jersey. After the arrests were made, the FBI executed over 35 search warrants throughout these states as part of an ongoing investigation of orchestrated cyber attacks against large organizations and companies.

The UK's Police Central eCrime Unit arrested one teen hacker on charges for breaching the Computer Misuse Act. The remaining apprehensions took place in the Netherlands where each of them are suspected to be associated with either LulzSec or the Anonymous hacker group.

During late November 2010, WikiLeaks was held responsible for releasing a large amount of classified U.S. State Department information in its website. Since then, WikiLeaks has been suspended from PayPal usage and could no longer receive donations through the online payment service. After the WikiLeaks scandal came to a head, various hacker groups who supported WikiLeaks' propaganda felt a need to initiate attacks against anyone who was not on their side prompting many of the recent cyber attacks from LulzSec and Anonymous hacker groups.

Authorities around the globe have remained vigilant on their endeavors to catch the hackers responsible for recent attacks against large websites such those belonging to Sony, Nintendo, PBS and even the CIA. One of the very first arrests was a 19-year old alleged to be one of the masterminds behind the LulzSec hacker group. Since then, authorities believe that the recent apprehension of 20 more suspects will put a damper on the hacker group's efforts. Additionally, several computers were seized in the apprehension which could lead authorities to even further arrests.

Only time will tell if the recent arrests will lead to the demise of LulzSec and the Anonymous hacker groups. Do you anticipate the authorities ever having the upper-hand on hacker groups when they make arrests of several culprits?