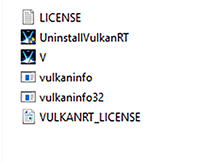 The software package known as VulkanRT has recently caused a bit of commotion online. There have been posts on various forums and online communities, made by people who got confused by the sudden appearance of an entry named "VulkanRT" in their installed programs list. Some users were surprised and confused by the new entry and, not knowing what it was, assumed it was a virus and communicated their fears online.

In reality, VulkanRT is not a threat or a malicious piece of software. The RT in the name stands for "runtime libraries". Vulkan, on the other hand, is the name of a graphical API which has the purpose of providing direct control over the computer's GPU and CPU usage. VulkanRT is developed by the Khronos Group in 2014 with the participation of huge IT names such as Intel, NVidia, AMD, Google , and Apple. The API was initially introduced at the Game Developer's Conference in 2015, while the first launch happened in 2016.

Vulkan's purpose is to provide a more optimized way to playback media and, therefore, the technology is used in a number of recent computer games. Basically, Vulkan improves the performance of 3D applications like interactive media and video games by distributing workloads evenly across a computer's CPU. This API has similar features to DirectX, Mantle, and Metal, however, in addition to that, it is able to work with many operating systems, including Linux, iOS and macOS. In general, VulkanRT is a successor of OpenGL, though it cannot serve as a replacement to it in all cases.

Main Features and Ways of Distribution

VulkanRT reduces the CPU workloads through a reduced driver overhead. That allows better scaling on multiple CPUs, which in turn, provides additional free CPU resources that are then available to do more tasks or rendering. Vulkan can also eliminate the need for a separate compute API as it manages both compute kernels and graphical shaders.

The reason why VulkanRT has started appearing in people's list of installed programs, seemingly out of nowhere, is that graphics card makers, most notably NVidia, AMD , and Intel, started bundling the runtime libraries needed by Vulkan with their driver downloads. A recent driver for any current graphics card will also unpack and install VulkanRT. This should not be cause for alarm as the VulkanRT component is just another tool that the Vulkan API needs to work properly.

Is It Safe to Remove?

Having Vulkan installed with your video driver does not necessarily mean that your system will ever need to use the Vulkan API. If you do not have any games installed that have support for Vulkan and it is a selectable renderer in the menus, chances are you will never use Vulkan in your everyday work or when watching other digital media. Still, it bears repeating that VulkanRT is not a malicious component or some sort of virus, so there is no cause for alarm. It is equally safe to remove the component as this will not make your graphics card suddenly stop working.

Malware makers could potentially use the ripple of panic and try to produce future malware that tries to pose as the legitimate VulkanRT component. Though no such threats have been reported yet, users should be alarmed if they notice an application with a similar name running in their Task Manager, like VulcanRT or vulcanrt.exe. In such cases, a full system scan with a reputable anti-malware program is highly recommended.

Further symptoms signaling that Vulkan Runtime Libraries could be a disguised piece of malware are: