System Tool 2011 is an especially badly-made rogue anti-virus program. If you've seen this one active on a computer, you probably have noticed that by now. Nonetheless, System Tool 2011 is still a threat, and one that tries to steal money, so it should be taken seriously as an online threat.

In most ways, System Tool 2011 creates symptoms that are completely typical for fake anti-virus software. System Tool 2011 will alter the registry in order to start every time Windows starts. So when you start your computer, the first thing you see after it boots is this fake interface for System Tool 2011. This interface is where System Tool 2011 runs its fake little system scans, which always turn up a list of threats, which System Tool 2011 always says it can't remove unless you purchase its "full" version. None of these threats is actually present on the system; the con-artists behind System Tool 2011 are just trying to scare you into believing that you have to purchase their bogus program.

After the fake system scan, System Tool 2011 will cause very frequent pop-up alerts, which have some really amazingly bad content. Some of these alerts are very bland, and they say general things about some threat being detected on the system, and then they prompt you to purchase System Tool 2011. However, one of these alerts – with the longest text of any of them – has a whole paragraph that says that all kinds of personal and damaging information is stored on your computer and is at risk of being stolen, which, as a result, could "break your life." (It's full of spelling and grammatical errors, too.) Clearly, the crooks behind System Tool 2011 are trying to incite panic, so that you'll rush off to their payment site and give them your credit card number and pay money for System Tool 2011, after which they will give you absolutely nothing for that money.

In addition to these blatant scare tactics, System Tool 2011 can disrupt the normal functions of your computer by preventing you from running other applications. Usually, when you try to start another program, System Tool 2011 will shut it down with some lame message about the program in question being infected with a virus. You may be able to access Internet Explorer, but chances are, System Tool 2011 will just redirect you to its own malicious site.

How System Tool 2011 Spreads Across the Web

System Tool 2011 infections begin with a Trojan, usually. In general, what happens is that a Trojan that supports System Tool 2011 is hidden in some other thing that you download, and then once the Trojan is on board, it makes sure that System Tool 2011 gets installed. There are reports that one of the most common camouflaging methods for these Trojans is in fake Adobe Acrobat or Flash updates, downloaded from third-party sites. Of course, sometimes the presence of System Tool 2011 is the result of falling for a fake "free virus scan" on a malicious site, which downloads System Tool 2011, or pretends to scan for viruses and then claims that a download of System Tool 2011 is necessary in order to remove the threats it has found.

Where Does System Tool 2011 Come From? 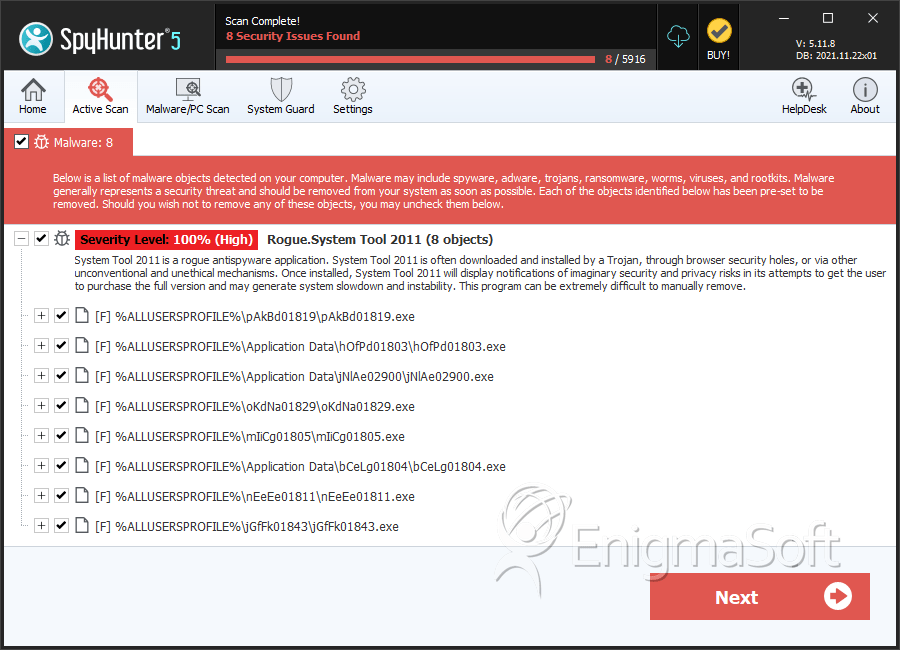 The following messages associated with System Tool 2011 were found: