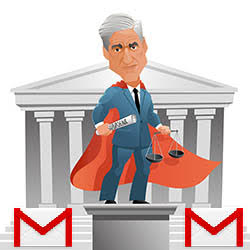 We don't ever get into politics and tend to keep distance of taking many media news stories for their face value. However, what has come to our attention in the recent weeks is the idea circulating around hacked emails, which are a central focus of the Mueller Russia investigation.

In today's Internet and social media-driven world, personal data security has become a huge topic for not only those who are concerned about their privacy, but it has popped into the mind of masses who may have had the careless attitude of using some of the worst "123456" passwords for their online accounts. In America, many can't help but see the repeated headlines scroll across their TV screens and mobile devices of an ongoing Russian investigation headed up by special counsel Robert Mueller.

The release of the hacked emails of leading political figures is among the most publicized election intervention play that's attributed to the Russian government. Arguably, the hacks were outright crimes and approached in a way to victimize hundreds of Americas.

Data Hacks Are a Common Terror

We've seen our fair share of hacks to take place in many different forms from simple theft of a computer user's email account credentials to the most egregious hack where hundreds of thousands of taxpayer records were stolen from an IRS data breach. Where there is a repeated speculation of so-called "collusion" in the case of President Trump and Russia, hackers have stirred things up to the point that has people on edge when it comes to their privacy of data.

When we first reported on the release of personal user data in the DNC hack during the 2016 presidential election, WikiLeaks was a known counterpart in linking a Russian hacker to the debacle. Furthermore, the theft of opposition data in the DNC hacker breach had ties to Russian spies as many outlets have reported in the past.

What comes to us as a point of examination is how the hacks happened and why they remain to be a center focus of the Mueller probe. In full disclosure, the totality of the hacks surrounding Russians, the DNC, and Trump, is far more complex than many media outlets let on. Starting in March 2015 all the way to May 2016, a group of hackers ramped up a phishing campaign that involved baited emails that appeared to be from Google claiming that someone has stolen the password of the user. The phishing emails were numbered in the tens of thousands and included links that would ask users for their login credentials and would collect such data only to pass it on to hackers. The phishing campaign is just one of many examples of how data hacks start and later propagate into greater issues that could be leveraged in many ways, both political and self-gain.

Hillary Clinton campaign chairman John Podesta had his Gmail account hacked through a phishing email during the 2016 campaign, which claimed to be from Google. Such phishing emails, as viewed in the in the Figure 1 image below released by Wikileaks, is a prime example of how hackers can trick computer users out of their personal information. The email itself is legitimate and a proof of concept where hackers can leverage other hacked email accounts to spread additional phishing emails. The email clearly includes a link to supposedly "change password", which then directs the user to a phishing site that is designed to mimic the look of a legitimate Google website that asks for login credentials that will eventually be stolen.

Figure 1. - Wikileaks screen capture of a phishing email that lead to the hack of John Podesta's Gmail account 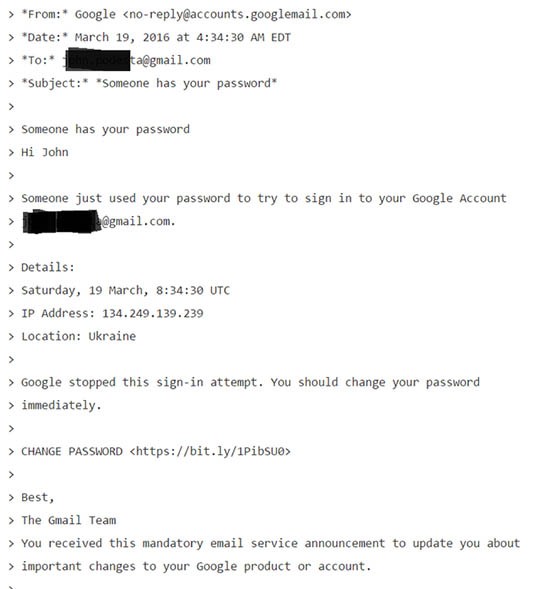 America vs. Russia - Hacked Data Gets into a Cold War of Its Own

As far as America vs. Russian exploitation in the rash of phishing emails, about 500+ of the estimated 4,700 emails were targeted at Americans, according to the Associated Press. In April 2016, also according to the Associated Press, over 130 Democratic accounts were recipients of malicious links to phish personal data, which included a "handful" of Republican accounts.

Ultimately, Russia was the blamed party in the hacks, including the phishing exploitation. However, the specific hacker group has remained anonymous, but many cybersecurity researchers have named the hackers several times tagging them with the labels: Pawn Storm, Fancy Bear, Iron Twilight, and APT (Advanced Persistent Threat).

Drawing a contrast in the DNC hack and what has unfolded as a hodgepodge of hacked emails centering around the Mueller Russia investigation, there have been many other instances of hacks that were said to have stolen data in other presidential campaigns. As such, the 2008 presidential campaign had inroads with China who were alleged to have hacked Barack Obama and John McCain's campaigns on certain levels. The contrast lies within the 2016 presidential campaign publicly posting hacked data instead of hackers keeping the data for themselves, which was the case of 2008's campaign. Never before have we seen cases where data hacks end up publicly publishing information that was stolen, which Wikileaks has been a major player in leading such a front.

The evolution of data hacks has demonstrated how complex and potentially damaging such cases can be in today's data-driven culture. If we've learned anything in the recent uncovering of data hacks centered around ongoing political investigations, there's a looming threat that undermines all that we have witnessed in the past about what data is untouchable. It's almost as if anyone's data is fair game and hackers will find a way to get what they want, one way or another. We can only speculate with an educated focus from past events that the future will hold many more data hacks that could reach deep into the bowels of humanity only to cause utter destruction within many avenues of the world, not just in politics.

By GoldSparrow in Computer Security
Translate To: Japanese Português