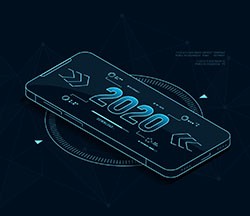 Every year we get a glimpse into the future from recent trends that we take notice from our internal data. With such, we see are able to decipher what cybersecurity trends are expected to be more prevalent in the next year with mobile malware attacks and ransomware being at the top of the list for our predictions into the year 2020.

With 2019 soon to come to a close, the year has been eventful, to say the least. Cyberattacks on computers as well as mobile devices have become a regular occurrence. Mobile malware threats and ransomware, such as Ryuk, CMD, Adame, and Phobos ransomware, have all flooded the market leaving many computer security experts and technology companies on edge for their efforts in combating such atrocities.

Following our predictions, we find that security companies like Check Point are also predicting that 2020 will be the year for an influx of mobile malware attacks as well as seeing ransomware continue on a rising path. According to Check Point's recent predictions, among others, there may be a new cyber 'cold war' lurking for 2020 where the trade wars between the U.S. and China could further separate the two economies and aid in a ramp-up of cybercrook and hacker operations against one another.

Other aspects that Check Point predicts that we will see in 2020 is a new influx of the fake news hysteria where cybercrooks may leverage certain aspects of the media furthering the propagation of mobile malware and ransomware, which both have played a big part in helping the spread of such malware. The targeting of high-profile brands and lobbying are also expected to take on a new life in 2020, giving mobile malware and ransomware a leg up in their spread efforts.

Ultimately, 2020 will bring on a new era of mobile malware attacks, mostly mobile banking malware attacks on mobile devices, which have already increased by 50%, according to Check Point research. When it comes to ransomware, the prediction resides with targeted ransomware attacks that home-in on certain industries, such as the healthcare industry that have come under attack in countless cases mostly across the U.S. in the past year.

The actions that are suggested to remedy the predicted attacks for 2020 have evolved over the past few years. Even the FBI has softened their stance on whether they recommend victims of ransomware pay the ransom to get their data back. Now, the FBI says it is okay to pay cybercrooks in the case of a mass ransomware attack that locks the data to essential services, such as in the case of a healthcare entity being attacked limiting the service of their patients.

With mostly anything in life, there is evolution. Such can be said about malware threats and the strong emergence of mobile malware, mostly due to the vast number of people who own mobile devices, not just cell phones. Moreover, ransomware looks to be the most prevalent type of threat into the year 2020 as cybercrooks aggressively utilize more sophisticated tactics beyond the traditional attack vectors, such as email or common phishing methods.

In the future, we believe that the use of Artificial Intelligence (AI) and cloud-related efforts will be some of the more-effective responses to new cyberattacks, such as mobile malware and ransomware. However, right now, the methods for combating cyberattacks on many levels remains to be proactive in the use of updated antivirus and antimalware programs to detect threats and protect systems from future infections, in addition to staying in-the-know of malware outbreaks and the steps to take when one encounters an unrelenting malware threat. AI and cloud solutions sound great and all, but we're talking many years in the future before such efforts will actually be effective.