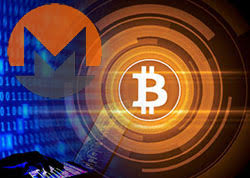 The Cyber Threat Alliance recently released a report on cryptocurrency mining with some scathing findings regarding illicit mining that has surged an astonishing 459 percent this year.

In the old days before the emergence of the Internet crooks naturally would hold up banks to steal money and at times they would leverage the known infrastructure of physical banking institutions and their inherent weaknesses. Today, after nearly twenty years of surfing what was once dubbed as the information superhighway that we know to be the Internet, crooks have taken on a new face, one that is rarely seen because they're hiding behind a keyboard armed with the latest malware.

With the introduction of cryptocurrency, which has been on the virtual move for close to a decade but has recently faced some serious challenges in the form of egregious cybercrooks who are targeting various forms of cryptocurrency for illicit purposes, or what we simply call theft.

The act of illicit cryptocurrency mining is essentially the equivalent of minting money. Such cases have surged 459% in 2018 compared to 2017 according to a report released last week by the Cyber Threat Alliance (CTA). Within the report, the CTA outlined that hackers are illegally generating Monero, Bitcoin and other forms of cryptocurrencies through exploiting a National Security Administration (NSA) software flaw that was leaked from the U.S. government.

Cryptocurrency remains to be one of the fastest growing spaces in the financial market today. However, much scrutiny and uncertain speculation loom over the validity and longevity of cryptocurrency and all of the workings of what is a relatively new form of currency contained in digital assets.

The actions of hackers attacking cryptocurrencies has evolved to be a serious problem across the globe. Already, hackers have armed themselves with sophisticated malware to attack and leverage cryptocurrency collateral. In a recent statement and blog post, Neil Jenkins, the chief analytic officer of Cyber Threat Alliance, said that hackers could essentially "sit back and watch the money roll in," when referring to the growing concerns of recent cryptocurrency cyberattacks.

Hackers have managed to leverage leaked NSA software, Eternal Blue, which was allegedly stolen from the NSA and leaked last year in an unsolved data breach. The hacker group supposedly responsible for the breach, who call themselves the Shadow Brokers, has released tools from the breach in over many occasions.

Computer security experts fear that the leaked software code has been utilized in a way to attack computers around the world and even used in attacks by the famous WannaCry Ransomware and NotPetya attack. Such attacks rooted from North Korean hackers as well as Russian sources that has led to damages costing billions of dollars.

While the outbreak of threats like WannaCry and NotPetya were slowed, the looming threat of illicit cryptocurrency mining places a gloomy cloud over the efforts to decrease cybersecurity risks for governments, individuals, and enterprises. Unfortunately, there is a rapid growth of cryptocurrency attacks with no signs of slowing that could either sound an alarm for us all or be the beginning of a destructive path that hackers willingly find in many facets of the cyberworld.