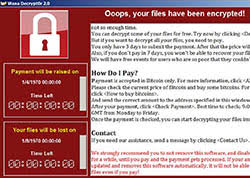 Computer hackers have gone into overdrive today as tens of thousands ransomware attacks have been initiated mostly targeting institutions in several European countries.

What has turned out to be a busy day for hackers, there have been countless ransomware attacks launched to targeting several companies, hospitals, governments, and other organizations across the globe today. The onslaught of ransomware attacks have reached over 70 countries thus far and is expected to spread. Computer security experts have attempted to get a grasp on the range of the recent attack today, and so far, they have not confirmed how widespread it is other than being a potential worldwide crisis.

The ransomware used in the attacks has been identified as WannaCry, as in you will eventually want to cry after discovering that your attacked computer is locked down by encryption of several files. WannaCry is also known as WCry, WNCry, WannaCry, WanaCrypt0r, or WannaCrypt0r Ransomware. The WannaCry attack, or WanaCrypt0r Ransomware attack, is conducting the well-known task that most recent ransomware performs, which is to demand payment in order for the victimized computer user to regain control of their system.

What some computer security experts and researchers have identified about the WannaCry Ransomware (aka WanaCrypt0r Ransomware) attack is that it is leveraging the U.S. National Security EternalBlue through a discovered Microsoft Windows vulnerability. In doing such, hackers are able to spread the ransomware via peer-to-peer causing mass hysteria due to the widespread reach of the threat.

Among the entities to come under attack, some have been identified as up to 16 hospitals in England, certain FedEx offices in the UK, and many other companies located in countries such as Spain, Germany, Turkey, Kazakhstan, Indonesia, the Philippines, Japan, and even the United States. As the attacks continue to spread, which have so far accounted for over 36,000 detections, some that may have originated out of Russia.

On computers that have succumbed to WanaCrypt0r Ransomware the ransom demand of about $300 is made with time limits. Some victims of the attack have reported blue screens on their affected system demanding payment within seven days. Others have reported cases of demanding payment within hours, which is typical of the countless ransomware threats we have witnessed in the past.

Kaspersky Lab has reported over 45,000 attacks in 74 countries hours after the initial attacks were detected. Reports are steadily coming in at record-breaking volumes. Even some victimized companies claim that they have advised staff to stop using all non-critical networked Windows computers temporarily.

Never before has a ransomware attack caused such an uproar as it has with the spread of the WanaCrypt0r Ransomware attack. Due to the worldwide reach of the ransomware, it has placed many companies, government entities, and hospitals on high alert. As we would have, it in knowing that ransomware is among the most dangerous type of malware we have encountered, everyone should be on alert no matter of a new outbreak of ransomware. It is always advisable to backup your computer's hard drive in the event of a ransomware attack. Moreover, it never hurts to run a reliable and up-to-date copy of antivirus or antimalware software on your system to assist in detection and removal of ransomware threats.

A Video of WannaCry Ransomware Attack Explained on CNN Money

By GoldSparrow in Computer Security
Translate To: French Japanese Português