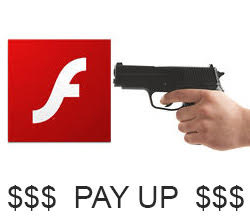 Ransomware has been a major nuisance in the computer security community in the recent years making history has one of the most dangerous types of malware. Ransomware has propagated to the point that Adobe is having to release an emergency update to its Flash application due to a security flaw that is being exploited to deliver ransomware to Windows PCs.

If you are not all familiar with ransomware, it is wise to know that such threats will infect your system usually from a malicious spam email attachment where it will then load and encrypt several files on your computer. From there, ransomware is known to display a notification demanding payment from $200 to $1,000 to obtain a decryption key, which is claimed to decrypt and restore all encrypted files so they can then be accessible again. In the recent months, ransomware has evolved to the point of becoming much more aggressive in their attacks.

In the case of Adobe issuing an emergency update to their Flash product, the software maker is faced with the task of alerting over 1 billion users of Flash that the software is being exploited in drive-by attacks that can ultimately infect computers with ransomware. The specific threat being spread is Cerber, which is one of the more aggressive forms of ransomware that has a voice feature, which reads aloud its ransom note to further urge victimized computer users to pay the demanded ransom.

Adobe products have long been known to have a doggy record for being attacked by hackers who ultimately find vulnerabilities within popularized programs, such as Adobe Flash and Reader. The latest attack where hackers are exploiting a security flaw or zero-day bug is being used to distribute Cerber Ransomware. Cerber Ransomware is somewhat similar to other aggressive forms of ransomware, such as CryptoLocker, .locky File Extension Ransomware, and the updated variant of Cerber, Cerber 4.0 Ransomware.

The attack on Adobe Flash to spread ransomware is one of just a few methods that hackers are using to spread the malware. The growing pandemic of ransomware has reached new fronts, including many government organizations throughout the world, hospitals, school districts, and even police stations. It comes to us as no surprises that through the use of a zero-day attack that hackers are leveraging a vulnerability in Adobe Flash to spread ransomware.

Computer users who are concerned about their Flash application being a culprit of spreading ransomware should take action to update the program immediately. Adobe has issued their emergency update this week and made it available to users of Windows PCs, Mac computers, systems running the Chrome OS, and even Linux computers. Though, this isn't the first time Adobe has issued an emergency update to Flash due to an exploited vulnerability that lead to the spread of ransomware. Such has taken place in the past adding to the proliferation of ransomware.

We recommend that you visit the Adobe site directly to download and apply an update to Flash and avoid any other sources offering Flash updates, as they may be malicious.