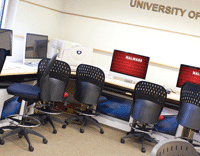 As Summer is reaching its end, and millions of college students prepare to head back to college, college students are bringing their books, their laptops, and, unknowingly, lots of malware infections. A geographical analysis report based on malware detections data from SpyHunter has discovered that a spike in malware activity was found in college towns during the time college students come back from Summer break. To learn what kind of mischief malware makers were having on college campuses, we took a look at malware infection rates in the college towns of each of the schools that made the Princeton Review's list of top ten party schools for the 2013 school year.

Why is There a Correlation Between the Rise in Malware Infections and College Towns?

We think there are a couple factors. First, any time there's a spike in population and Internet activity, there will be a spike in malware infections. There just simply are more people using more computers to do more things. Second, there's a good chance that some of the newer college students may be using new computers (graduation gifts, etc.) or are now solely responsible for the security of their computers now that they are away from home. Below is a list of the top ten party schools of 2013 according to the Princeton Review along with a spike (or decline) in malware infections between July and August 2013.

Ransomware is a malware infection that creates bogus messages, purporting to be from law enforcement agencies. Those messages tell the PC user that their computer has been used for illegal activity and demands they pay a fine to avoid prosecution. The messages are fake, and the allegations are false, but the money you could waste is very real.

Below is a list of the five most dangerous threats infecting computers right now.

The best way to protect yourself against unwanted malware infections is to have a good anti-malware software installed such as SpyHunter and to be extra cautious when surfing the Web. Also, you should be careful when downloading software from untrusted web sites; downloading codecs for video players; and clicking on strange links from dubious sources sent to you via email or social networking sites because it can increase the likelihood that you'll get exposed to malware infections.