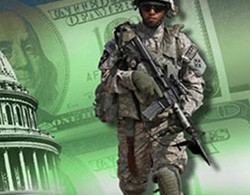 Some service members and vets of the world's most powerful military are finding out that they have been duped out of millions in what has been uncovered as a global crime ring scheme that has stolen thousands of social security and bank account numbers.

A recent fraud scheme has stolen thousands of U.S. service member and veteran's personal information all from screenshots that were taken of records appearing on computer screens at a U.S. Army base in South Korea. The screenshots included imagery of service member and vet social security numbers and banking account numbers that were then used by a cybercrook gang to steal funds and wire to bank accounts of money mules to launder the money.

In what is being classified as a massive identity theft scheme, cybercrooks belonging to a global crime ring who have recently been caught and pleaded guilty to charges related to the matter, is the largest criminal case ever involving theft of military personnel data. The crooks preyed on veterans where they were able to successfully steal funds out of accounts and then launder the money so they could erase their tracks. Unfortunately for the crooks, authorities were able to track them down, and five have been indicted in the identity theft scheme in August 2019.

The Justice Department found that the defendants scoured the screenshots containing social security numbers and banking details from a technician who worked for the military. Over 3,000 veterans and military personnel had their data comprised over the course of five years from 2014 to 2019. A number of the vets affected were disabled and older individuals who may have had the most benefits making them prime targets to scour as much money as possible.

Among the five defendants in the indictment (Robert Wayne Boling Jr., Fredrick Brown, Trorice Crawford, Allan Albert Kerr, and Jongmin Seok), three are United States citizens, one is Australian, and the other is Korean. The Justice Department has not provided their ages or permanent places of residence. However, many of the defendants had ties to military personnel where they may have worked on military bases as civilians or had knowledge of accessing the eBenefits website used by the Department of Veterans Affairs and Defense Department.

Only prime targets sought to garner higher payouts for crooks

Ultimately, the case of retired U.S. military personnel and vets being targeted is grouped in with the notion that older individuals are primary targets for people to prey upon and steal money from. The paths that the perpetrators in this case took ranged from making charges against victims' debit cards to changing banking account and routing numbers to redirect funds and later launder them to hide their tracks. In all, the funds equate to millions of dollars taken from a collective of victims.

In retrospect, cases of data theft and financial loss, as a result, are growing issues in today's technological landscape. Such an incident comes to us as no surprise. However, we're elated that the perpetrators in the case of U.S. service members being duped are being brought to justice, to further emphasize the consequences that hackers may face in performing such heinous acts. Hopefully, this case will set yet another example and help make the world a safer place for everyone.