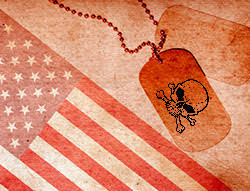 Hackers are known for their relentless efforts in causing utter chaos over the Internet whether it is their actions of attacking a web server belonging to a large company or government entity, or compromising massive amounts of data and later spilling it over the Dark Web. Unfortunately, the latter has taken place dropping thousands of US Military personnel records over the Dark Web revealing service member's names, phone numbers, addresses, emails, age, gender, and income.

The hacker group responsible for the recent compromise and spill of Military personnel data was found to be the Ghost Squad group, which have outwardly made their actions known over Twitter. The OpSilence campaign is part of the hacktivist movement initiated by the Ghost Squad Hacker group during the beginning of June 2016. A the time, the group made it clear that they were against mainstream media sites due to them supposedly failing to report the actual crimes taking place in Syria and Palestine.

It's not uncommon for well-organized hacker groups to lash out in opposition to actions conducted by certain organizations. Moreover, we expect to witness numerous campaigns started by hacker groups to oppose the actions of random entities where they take to Twitter and the Internet to wage attacks and undermine their infrastructure through hacking activities.

The recent breach of US Military records by Ghost Squad hackers includes several dumps of data. Within the dumps, as many as three instances, there are hundreds to thousands of records spilled that all include detailed personal data of each person. Experts have claimed that as many as 3,400 records of servicemen were exposed. The data was dumped over the Dark Web, which is only accessible by using the TOR web browser, which is a common tool that hacker groups and those who surf the underground web utilize.

The message relayed by the Ghost Squad hacker group claims to be a part of their extensive #OpSilence campaign, which has been a series of DDoS (Distributed Denial of Service) attacks against many entities, including several banks in different countries, which is an expansion on their Oplcarus campaign.

Much like the Anonymous hacker group, Ghost Squad hackers are part of a movement that actively promotes particular oppositions. In their quest to make their stance known, both hacker groups are adept to attacking servers and compromising data, which Ghost Squad has done this month to expose thousands of US Military personnel records.

What has been murky information is the idea of the Ghost Squad hacker group's leader leaving the group due to the recent leak and fears of U.S. retaliation. You have to realize, the U.S. government is probably not taking the recent attack to uncover thousands of US Military personnel records very lightly. Though, another hacker group leader, Junaid Hussein, was killed in a recent drone strike conducted by the US. As far as any relation to previous hacking incidents against the US and the recent drone strike, it all remains to be unseen and clearly a speculation. However, Junaid Hussein, at the time of his death, was part of the Islamic State's Hacking Division known as the Cyber Caliphate.

Hacker groups like Anonymous and Ghost Squad may sometimes get ahead of themselves in recent hacking incidents. Even though the compromised data is only made available to those with the proper tools, the data is fundamentally made public and such actions against the US may eventually have dire consequences for the hackers and the victimized Military personnel, as does any data breach of this level.