TeslaCrypt Ransomware Authors Rake in Over $76K in Just 2 Months 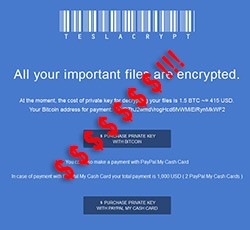 For obvious reasons, most hackers and cybercrooks do what they do for money and hardly ever back down for a good challenge that grants them satisfaction and a nice pay day. It just so happens that the creators of the TeslaCrypt Ransomware threat have racked up over $76,000 in just 2 months from their collection of ransom payments made through the malware's e-payment offers for computer users wanting to decrypt files.

TeslaCrypt is a ransomware threat similar to CryptoWall and CryptoLocker that are well-known for encrypting files on an infected computer. The TelsaCrypt ransomware threat usually displays a notification on an affected system's screen relaying a message that certain files are being encrypted but then offers a way for the user to pay to supposedly decrypt those same files. The offer to decrypt files seems like a winning case for some users who have paid upwards of $600 in bitcoins or process payments through offered PayPal My Cash services. These services are offered directly from the TeslaCrypt threat message and sometimes fail to provide a decryption key or method for restoring those encrypted files.

TeslaCrypt has long been in the spotlight for being one of the most destructive malware threats in line with other similar ransomware threats, such as CryptoLocker and CryptoWall. The commonality between these threats is that they all cause damage to files through encryption and cannot be removed from an infected Windows PC without the proper antimalware solutions.

In tracking the bitcoin money or other e-payment-processed funds, researchers at FireEye were able to find that buying the decryption key with bitcoin digital currency was cheaper than paying via PayPal My Cash. The fees may increase to nearly $1000 per occurrence and account for over 1,200 victims in total in a recent two month period.

Of the 1,200 or so victims, only 13% of them purchased a decryption key. Outside of that, some of the victims were provided with a decryption key for free by reasoning with the cybercrooks and authors of TelsaCrypt. Other cases the cybercrooks would reduce the fee but in the end the amount that the hackers made off with has amounted to over $76,000 in total.

The scheme of using aggressive ransomware threats like TeslaCrypt to extort money from computer users is run almost like a normal business. The customers, who would be considered the victims, are sometimes wise enough to ask for discounts or get away by receiving a free decryption key. Some figure it was in the TeslaCrypt Author's best interest to avoid fighting with a wise victim and rather get paid by one that is gullible enough to fall for the bait.

Menacing ransomware authors have been a major nuisance among computer users who are unfortunate in obtaining a threat like TeslaCrypt on their PC. Due to recent ransomware threats being so aggressive in their actions and evading most types of conventional methods to remove such threats, ransomware proves to be the most difficult type of threat to remove. With the authors of ransomware making decent money from their efforts, it looks as if such threats will continue to multiply and wreak havoc among computer users around the world. TeslaCrypt is just another example of a successful ring of malware authors making a clean getaway with the money of victimized computer users.