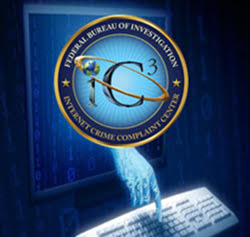 Let it be known; ransomware has taken the computer security world by storm in a way that the storm path has claimed many victims in the form of lightning their pocket books and destroying personal data stored on infected computers.

The Internet Crime Complaint Center, or IC3, is a well-known force run by the FBI that collects mountains of data from consumers who naturally send in complaints of computer security issues and internet crime. With that, the FBI can decipher what issues are taking place on the Internet and throughout the connected world that we live in today.

When it comes to the unprecedented growth and proliferation of ransomware in the recent year, the FBI's IC3 has taken some serious notes and have revealed such threats being a major terror for countless computer users. Not only has ransomware terrorized data on computers, but it has also been a massive money extortion machine where its authors are making millions of dollars at the expense of victimized computer users.

We revealed our reports on ransomware campaigns and collected from our internal data demonstrating how ransomware has intensified in this year alone compared to the same time last year and the year before. In all, we show ransomware growing by 14% year over year, and it seems ransomware authors are ramping up their efforts with no slowdown in sight.

The FBI's data collected by their IC3 division only accounts for actual complaints sent in from victimized computer users. Outside of those complaints are numerous cases of computers, servers, and business systems being infected with ransomware wreaking havoc and slowing operations to a crawl to ultimately cost companies, organizations, and individuals hundreds to thousands of dollars in each individual case.

As we know very well, recent ransomware is known to infiltrate computers through spam email attachments. Once loaded on a system, the threats will start encrypting files making the system unresponsive and eventually useless for performing essential functions. Ransomware will then relay a notification explaining how the files can be decrypted, but a substantial fee is required, which may range from as little as $100 to well over $1000.

Among the most recent ransomware attacks, cybercrooks and hackers are targeting enterprise entities and end users where the systems affected may severely disrupt operations leaving victims with no choice but to consider paying the ransom fee to get have their files decrypted and restored. As a prime example, a Hollywood hospital ended up paying a fee of $17,000 to decrypt their data on systems infected with ransomware because their care operations were put on hold until the system restored to normal operation.

Let the FBI's latest IC3 report be evidence and a driving force to prompt action in being proactive when it comes to safeguarding your own computer. For now, the best methods for protecting your system from ransomware is first to create a full system backup in addition to running an updated antivirus or antispyware application that can detect or prevent such infections. Moreover, utilizing extreme caution when opening up questionable emails with attachments, which can be spam that spread ransomware.