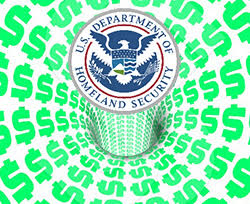 Cybercrime only pays up to the point that the perpetrators are caught. In the meantime, many facets of cybercrime pays well as many of the attackers behind recent Ransomware will tell you if they could.

In what appears to be the US Government seeking answers and solutions to the rising insurgency or Ransomware threats, the Department of Homeland Security (DHS) has been asked to present a report on the circumstance.

Give it some thought; a government agency office's main computers are hit with the CryptoWall ransomware threat. The officials at the office have failed to back up their important data that is required for day-to-day functions. The officials then make the decision to pay the ransom so they can release their systems from under the captivity of having files encrypted by CryptoWall. Fundamentally, following through this process is using US Government money to indirectly fund cybercrooks. It's just that simple, and wrong.

The US Senate wants additional details about what the Department of Homeland Security is doing to combat ransomware and eventually stop indirectly funding cybercrooks. A letter drawn up by two US senators, Homeland Security and Governmental Affairs Committee Ranking Member Tom Carper (D-Del.) and Chairman Ron Johnson (R-Wis.), cites operations in the past that have been successful with taking down cybercriminal groups running ransomware campaigns.

Apart from the success in taking down ransomware perpetrators, ransomware threats continue to rise to unprecedented levels.

As an attempt to nip ransomware in the bud, the DHS is being asked to provide additional details of their current operations to tackle ransomware. Additionally, along with the DHS, the Attorney General is also reemphasizing the importance and urgency of their ransomware operations.

There have been some interesting communications from cybersecurity outlets and even the FBI in their advice to victims of recent ransomware. Somehow, the advice to pay the ransom to get your system back has been communicated to many outlets and has been the same theme at many US government agencies and offices. While the advice is a relevant solution to restoring a ransomware-infected computer back to normal operation, the backlash within US government agencies is that they are paying cybercrooks ransom fees, which is essentially indirectly funding cybercriminal activity.

As the hunt continues for ransomware cybercrooks, the US government will be taking the appropriate measures to limit or completely eliminate indirectly paying cybercriminals responsible for their ransomware shenanigans. After all, the DHS and other associated US government agencies are supposed to be responsible for helping to protect victims and fight cyber threats, not finance the cybercrooks' efforts.