There is no doubt about this year being the year for ransomware threats and their evolution to aggressively extort money primarily by encrypting files and holding them for ransom.

With such an insurgence of ransomware threats throughout 2015, the outlook for 2016 looks to continue with the ransomware being the dominating malware threat, which the recently-released McAfee Labs Threats Predictions Report clearly outlines.

While there is no clear crystal ball for precisely predicting what will come of malware in 2016, McAfee Labs Threats Predictions Report, released just this week, and concludes that cybercrooks will continue to focus on ransomware threats while we will see less hacktivism next year.

Many ransomware groups have made away with hundreds of millions of dollars during 2015. While Adobe Flash Player vulnerabilities remained to be the most problematic application of 2015 when it comes to malware attacks, other trends we saw ticking upward were exploit kits. In recent events, aggressive ransomware has caused irreversible damage to files forcing computer users to restore their computer from a backup or suffer a complete loss of hard drive data.

McAfee Labs' report reveals many things about predicting malware. For one, we know it is not a certain science. However, their predictions fall perfectly in line with what the end of 2015 is revealing to us. Those conclusions reside on the fact that ransomware threat authors are not going to back down anytime soon and the current form of hacktivism, or the practice of breaking into a computer system for politically or socially motivated reasons, is on a continual downturn.

As to some of the main reasons for hacktivism practices meeting their demise is due to many of the hacktivism ring leaders and groups have been arrested, prosecuted, and imprisoned, as stated by Intel Security during their release of McAfee Labs Threat Predictions Report.

While the predictions for malware in 2016 are on a ransomware bandwagon trip, we will still see the road blocks in the form of Zero-Day attacks through vulnerable applications continue to keep things interesting. The chart below sourced from McAfee Labs shows how Adobe Flash continues its prevalence as being the most vulnerable application in Zero-Day attacks during 2014 and 2015. 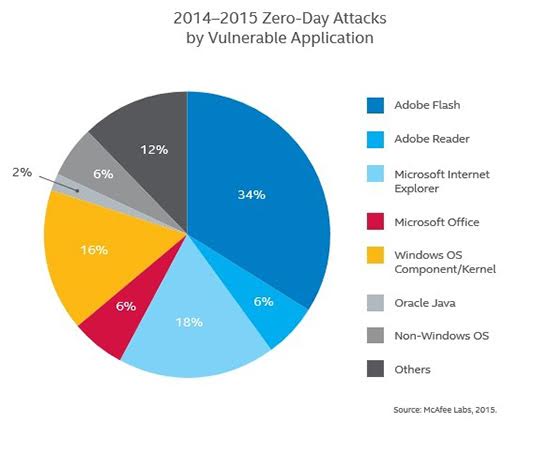 As you may already guess, 2016's trends will continue based on this very premise that you see in the chart above when compared to other current software apps on the market.

While we struggle to combat ransomware threats, which are predicted to have a dominating force for malware in 2016, we must not forget how hackers still thrive on Zero-Day attacks on vulnerable applications with Adobe Flash Player having the biggest bullseye target.