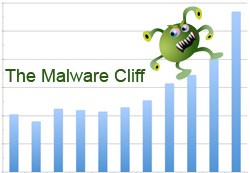 As we leave behind the year 2012, we expect an unknown horizon where malware has the formidable challenge of topping what was a year that we observed a dramatic and astounding surge of malware threats.

What was once perceived to be a commonality among malware threats had the tendency to be morph into new-found malware threats during the year 2012. Not only was 2012 the year that malware took a virtual rocket ship alongside of the new Mars Rover in reference to the volumes we saw, but malware has taken on a new face.

The new face of malware has never been uglier. During the year 2012, PC users plagued with these new-found threats were forced to endure the wrath of threats such as sophisticated rootkits, trojans, rogue antispyware applications and the infamous ransomware (ie: FBI Moneypak Ransomware, Ukash Virus).

What is even scarier about our predictions for malware in 2013, is the idea of rootkit-type malware and even mobile malware becoming a pandemic. The prediction is also based off of the fact that there are not many solutions to successfully remove rootkits, sophisticated Trojans or mobile malware threats. Speaking of not being able to remove malware threats, our technicians have been hard at work coming up with an inclusive means to remove stubborn malware, such as rootkits and canny Trojans. Such efforts require digging deep into the new structure of malware and make proactive modifications based on our predictions and recorded trends for malware.

ESG has made several predictions over the years to paint a better picture for computer users, so they may take the necessary actions to protect themselves. In particular, we made predictions for the computer security and malware trends to expect in the year 2011 with an unambiguous contrast to the previous year. For the year 2013 and beyond, we steadily stay the course on making the prediction of expecting more aggressive techniques with a shift in the use of traditional malware trend.

Many of ESG's predictions for malware in 2012, have, unfortunately, come to fruition. As we look back on 2012, we can recapitulate many of the specific types of emerging threats that were virtually new to the computer security world.

New types of malware threats identified in the year 2012

How to remove trending malware threats in the year 2013

We literally worked overtime to crack the virtual code of new trending malware threats throughout the year 2012. ESG, with our predictions for 2013 malware trends, have crafted our SpyHunter software to include new advanced features giving it the capability to remove rootkits and other stubborn malware. By having anti-rootkit capabilities built into SpyHunter, we are able to massively expand on the list of advanced malware threats that our software is able to remove.

How does SpyHunter remove rootkits and other related malware threats?

This video demonstrates how we are able to detect and remove rootkit infections, as well as other correlated malware.

SpyHunter includes an advanced anti-rootkit feature that makes use of a Compact OS (Operating System). By providing a Compact OS within SpyHunter, an infected computer can be booted without Windows, so rootkits or rootkit-types of malware may be removed from your computer.

With the Compact OS integration, SpyHunter is able prevent rootkits and other pesky malware threats from having the jump on loading into memory at startup of Windows. Bypassing Windows has proven to be one of the very few ways of tackling rootkits and malware threats.