During the second half of 2014, studies have revealed that cybercrooks have doubled their efforts to produce and spread new strains of malware accounting to a growth rate of 125%.

At one point in time, gas prices were like the malware rates, on a steady incline causing a serious worry for the general public in more ways than one. The major difference in the two is that malware strains and rates continue to rise to unprecedented rates increasing ever so slightly. Now, the influx of new malware strains seems to be the consistently rising statistic, one that can be counted on year-after-year to increase.

There are several security companies that collect malware samples and examine new strains for the sake of keeping tabs on emerging threats in preparation to combat and remove them. The German security vendor, G Data SecurityLabs, has examined such data over the course of many years. In their latest study, they have revealed how the second half of 2014 marks a monumental time for malware creators yielding a significant influx of new malware strains. During the year of 2014, malware authors and cybercrooks flooded the internet waves with new malware strains amounting to nearly 6 million malware samples identified by the security vendor. Of those 6 million samples, about 4.1 million occurred during the second part of 2014. That means a new threat emerged every 3.75 seconds.

Just think, in the time that it took you to read the paragraphs above, malware creators would have injected about ten new threats into the wild ready to pounce on vulnerable computers around the world.

G Data's recent report revealing how new malware strains have doubled in volume for the second half of 2014 also shows that adware variants account for a large portion of the threats, about 31.4% of all threats sampled. That's about one in every three samples being an adware type of malware threat, which is evident in our daily threat analysis and removal reports. 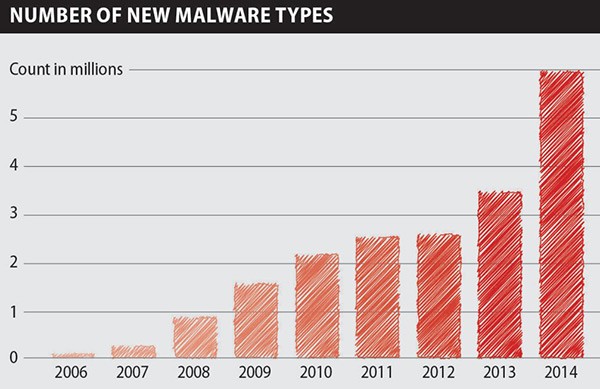 As far as the countries most targeted by banking Trojans during the second half of 2014, as demonstrated in figure 2 below, G Data revealed that the USA accounts for 35% of the spread while the UK falls in line at 24% and then Russia accounting for a 20% rate of being targeted. 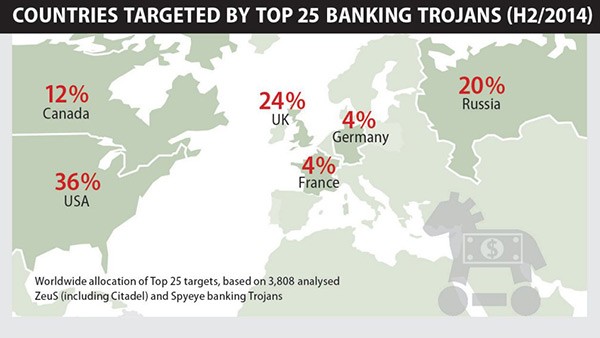 One of the surprising aspects of G Data's recent study for H2 2014 is that aggressive Ransomware threats didn't appear to be included in the results. It may be the fact that Ransomware is already bringing malware authors a handsome payday that they don't feel the need to flood the market with such threats just yet. Though, we continue to keep tabs on their activities and will be one of the first to alert computer users of such emerging threats.