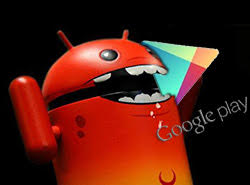 Smartphones are so popular nowadays that you would be hard pressed to find a working-aged adult that doesn't have one. If you did, that person would probably be the most stress-free human on the planet for many reasons, one of them being they don't have to worry about downloading malicious apps from the Google Play Store, which have reappeared to take control of infected devices.

In the latest propagation of smartphone malware, the Google Play Store is strife with malware apps again after many of them were previously taken down in September and October of 2015. The malicious apps have come in numbers, as many as 13 of them that Google removed on December 29th.

Malicious smartphone apps, mostly ones that are designed to run on the Android operating system, have become a general nuisance for users of devices that run the popularized OS. Many of malware-laden smartphone apps have come from third party sources while the Google Play Store, the trusted source for obtaining legitimate apps, has succumbed to several malicious apps that were secretly pushed to users.

The sneaky methods of recent malicious apps and their enforcers have taking on a new light, one that utilizes affiliate programs that reward users and webmasters using a pay-per-install method. The installation of the unsuspecting apps are designed to push malware that eventually gains root privileges and installs unsolicited apps without the user's knowledge.

The malicious smartphone app identified as Brain Test originally infected over one million Android devices through what appeared to many as a harmless IQ testing application. In its updated form, the Brain Test app sneaks into devices through an affiliate program permitting cybercrooks to cash in on infecting smartphones and forcing unwanted apps. The whole methodology is rather ingenious. Even so much that the infected app's core functions are left intact not to alert the user of anything out of the ordinary while it further infects the smartphone and embeds deep into the device.

Those who have attempted to reset their Android smartphone or tablet device to rid the malware have run into a road block. The Brain Test malware, in its latest form, can gain boot persistence, which means that resetting an infected smartphone to factory settings won't remove the threat. Those looking to eliminate the Brain Test malware will need to wipe their entire ROM storage and reinstall the Android OS or restore from a backup.

At the forefront of malware propagation, smartphones have proven to be nearly as vulnerable as normal computers. One of the main reasons for the growing spread of smartphone malware is due to the open source Android OS devices lacking any malware protection versus the higher percentage of Internet-connected computers having the proper antivirus software readily available and installed. Until smartphone users start taking proactive measures to protect their devices through either limiting the download of apps from third parties or running antivirus apps, the smartphone malware epidemic will continue to get out of hand.