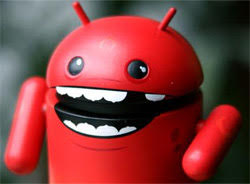 Smartphones have been a part of nearly everyone's life or, at least, anyone who is of the proper age to own a smartphone device. With so many smartphone and tablet devices in circulation and being utilized every second of every day, hackers are on the lookout to attack such devices with aggressive malware in ways that garner them a quick payday.

Smartphone malware is nothing new. However, the Android platform, currently the most-attacked mobile operating system, has a new malware threat that is causing a major uproar among its users. The malware, currently identified by researchers at Lookout as a trojanaized threat that displays advertisements, is disguising itself as a popular app, which will gain root access to a device and embed itself so deep that users may be required to reflash the operating system or replace the device altogether.

Android users have been faced with the unfortunate cases of being able to download and install 3rd party apps, mostly due to the mobile operating system being so open. Unlike Apple's iOS and their stringent process of monitoring and approving apps in the App Store, Android's platform has other outlets that allow installation of 3rd party apps outside of the Google Play store. It is mostly on the 3rd part app stores that Android users may encounter malicious apps, which Lookout has identified nearly 20,000 of them from various countries having malicious code.

The apps in question that are proving to be nearly impossible to remove and sometimes ending up requiring a reflash or complete replacement of an infected device, are identified as the Shedun, Shuanet, and ShiftyBug apps. These apps can gain root access within an infected device enabling them to install exploits that may appear as harmless system apps. Through the root access and installed exploits, the malware makes a permanent residence within the device and in most cases it cannot be removed.

The act of rooting an Android device creates a serious security risk as it gives other apps root access where they have unrestricted abilities to access files created by other apps. Think of the root process of being a case where you leave your front door unlocked at night giving anyone who is brave enough unadulterated access to enter any room in your home whenever they want.

Currently, the malware from identified malicious apps has not made its way to the Google Play store. However, there are a multitude of Android users who purposely seek out 3rd part app stores where the majority of malicious apps are distributed.

Over the past few years, smartphone malware has increased exponentially and continues to do so even with the promises to provide better-secured versions of Android, which remains to be the most attacked mobile operating system. It is times like these that security vendors may be required to step up to the plate and provide security solutions for mobile platforms like Android. If no action is taken, we could continue to see a perpetuation of mobile malware that essentially damages devices with malware that cannot be removed, which will cost smartphone makers and consumers a lot of money.