Little Rock, Tampa, and St. Louis Top the List for Most Malware Threats in 2015 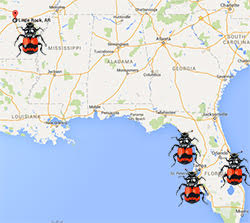 2015 concluded as a momentous year for hackers and creators of computer malware and viruses. They attacked millions of computers across the United States, and people in the cities of Little Rock, Tampa, and St. Louis got hit the hardest. As an update to the first-half of 2015 data, the ESG research team has compiled their latest data. The experts at EnigmaSoftware.com analyzed more than 25 million different infections on computers in the 150 largest cities in the U.S. once again. This time, taking the collective data for the year of 2015, the cities with the most infections per capita were Little Rock, Tampa, and St. Louis. Orlando and Denver rounded out the top five. This list looks very similar to the rankings in 2014 and our first-half of 2015 update, with the major exception being Little Rock, which rocketed from #10 on the 2014 list to #1 on the 2015 list.

Tampa was more than eight times the average. This year, the active cities were much, much higher than the national average compared to the top cities last year. Overall, Buffalo was the biggest mover, jumping 29 spots from #47 to #18. "There are so many different ways that infections can end up on computers that it's tough to make any generalizations about why certain folks in certain cities seem to have more than others," said Morganelli.

Some wonder what exactly causes a particular city to have higher than normal infection rates. Morganelli says that it is very hard to tell. "I wish there was an easy way to determine what makes people in one area more susceptible to malware infections," Morganelli says. "But there are so many different ways that infections can end up on computers that it's tough to make any generalizations about why certain folks in certain cities seem to have more than others."

Common malware infections frequently show up on computers from websites that have malicious content or files that are downloaded. Most of the sites are adult websites that promote various video players, which are sneaky ways to install a supposed video player update that turns out to be malware. Though, it does not mean that certain cities are visiting more adult websites than others. However, as exclaimed by Morganelli, "But that still is one of the biggest sources of the malware that our software detects."

One of the most significant sources of malware infections is when unsuspecting computer users are tricked into clicking on links that may download malware or redirect them to a website that has malware on it. Those links can come in the form of emails that look like something legitimate, or in social media messages that have been hijacked by hackers.

"Because of the growth in online communication--be it Facebook, LinkedIN, Twitter, Pinterest, Instagram--there are now more and more ways for bad guys to reach out to people and trick them into clicking on links," Morganelli said.

Online shopping is another source of infections. People who click on links in emails promising great deals, or people who scour the internet looking for the best prices can sometimes end up clicking on a link that leads to infection. EnigmaSoftware.com reported that on each of the last three Cyber Mondays, infections spiked 40%.

"The best way to protect yourself is to have a trusted anti-virus and anti-malware program installed and updated regularly. We obviously recommend SpyHunter," said Morganelli. "Then, it's always best to think about that link. Before you click on something in an email or social media message, think for just a couple seconds about whether what you're looking at is too good to be true or seems a little suspicious. Exercising just a little extra caution could help keep you from getting infected."

Below is ESG's list of the top 20 cities with the most infections per capita in all of 2015, along with how much higher their infection rate was compared to the national average.

Top Cities with the Most Malware Infections in 2015