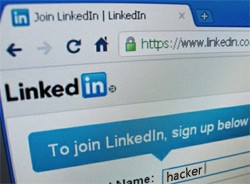 In the latest attempt to hack a large social network, cybercrooks prevail once again this time by pilfering passwords belonging to over 6 million LinkedIn users.

LinkedIn, one of the largest professional social networks, has been a largely utilized network for those who wish to create a professional online profile. In the current economic conditions, LinkedIn has been a means for virtually millions of job seekers and employers to find an outlet to become noticed, in addition to communicating with other networked entities. Having over 161 million users, LinkedIn has become the target for hackers as it has just received a hit from a Russian cybercrook to expose over 6.4 million user passwords online.

The LinkedIn password theft incident was first brought to the attention by a report posted on TheVerge.com blog reporting that 6,458,020 encrypted LinkedIn passwords were dumped online. As far as whether the passwords were swiped by hackers has not yet been confirmed. LinkedIn will quickly point out the fact that the passwords posted online belonging to over 6 million of its users were in posted in encrypted format. Basically, those wishing to swipe these passwords would first need to decrypt them. Such a task for a hacker equipped with the necessary encryption software would be relatively easy.

Since the attack, LinkedIn has not taken any additional steps to further secure them. However, LinkedIn has advised users to change their password. Those accounts belonging to users whose passwords were compromised, are to receive specific instructions on how to reset their passwords.

This attack on LinkedIn marks the second time that the professional and business social network has faced security scrutiny just this week. A weak link in security discovered by mobile researchers at Skycure Security consisted of the company's iPad/iPhone app transferring data from iOS devices to the LinkedIn servers in plain text. With properly equipped hackers on one end, this data could have been compromised further relinquishing user account data.

This is not the first time, and probably will not be the last, that millions of users of a popular social network are caught up in the brunt of a hacker attack. In today's robust and evergrowing social network interface over the Internet, it becomes an unfortunate matter of time before the next attack takes place. Those utilizing such social networks are advised to utilize safe practices, which involves proactively changing passwords and limiting the amount of personal data transferred or surrendered over these networks.

Additional information and tips on how to secure your own online social network accounts: