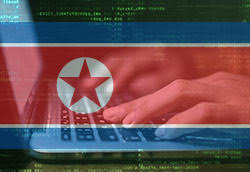 The US Department of Justice has announced charges against a North Korean hacker who looks to have been responsible for the crippling WannaCry Ransomware attack left many of us shook to our core from its destructive attack widespread across the globe in addition to the massive Sony hack in 2014 compromising employee data.

The announcement of the charges comes after the publication of an FBI wanted poster released this week identifying alleged North Korean programmer Park Jin Hyok being part of a state-sponsored hacking organization responsible for WannaCry Ransomware and the 2014 Sony hack. Additionally, according to the FBI, Park Jin Hyok appears to be the culprit of a series of attacks that targeted banks around the world where there was a collective effort to steal more than one billion dollars.

The charges brought up on Park include one count of conspiracy to commit wire fraud and another count of conspiracy to commit computer-related fraud. Back in June 2018 a federal warrant was issued for Park's arrest, but he has yet to be brought into custody. Park is believed to be in his 20s or 30s and has continually traveled to China to do legitimate IT work. The FBI and law enforcement officials are currently gathering additional information that may lead to Park's whereabouts as they continue to alert others to notify local law enforcement if he is seen.

North Korea viewed as culprits in conspiracy of cyberattacks against U.S.

There continues to be a looming ideology that North Korea, among other countries, have committed cybersecurity violations against the United States. With the new information on Park being a hacker who has hacked many entities for self-gain the U.S. is forced to take note and potential action against cybersecurity crimes. Just this week, after the charges were announced against Park, the U.S. Department of Treasury sanctioned Park and Chosun Expo Joint Venture, a front company that Park was alleged to be a participant in a range of criminal conspiracies undertaken by hackers employed by the North Korean government.

"We will not allow North Korea to undermine global cybersecurity to advance its interests and generate illicit revenues in violation of our sanctions," said Treasury Secretary Steven Mnuchin in a statement. "The United States is committed to holding the regime accountable for its cyber-attacks and other crimes and destabilizing activities."

Patterns of disruptive and potentially harmful cybersecurity activity have prompted the U.S. to hold North Korea accountable for recent malicious activities. The 2014 hack on Sony Pictures Entertainment was only one incident among many others that exposed the personal data of employees. Such actions are threatening even though many believed the attack was an answer to the controversial movie screening of "The Interview", which was a fictional comedy depicting North Korean leader Kim Jong-un in compromising and comedic views.

Not only did Sony suffer from the hacking incident but Park's alleged work impacted other big companies linked to the Sony productions. Moreover, Park's hand in the WannaCry cyber attacks lead to hundreds of thousands of computers being attacked, which included systems crippled in Hospitals, government agencies, corporations, and other organizations in over 150 countries.

As the Department of Justice seeks 'Justice', the efforts to bring Park in and face his charges have been set in motion. Extradition for Park to the US to face the charges has yet to be determined if he is captured. For the better good, we hope that Park and other government-backed individuals suspected of malicious involvement in cyber attacks are brought to justice in some aggressive form.