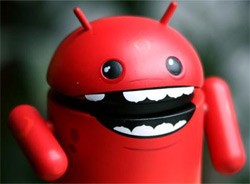 Could you imagine a threat as destructive as Zeus, one of the most popular botnets in the world responsible for robbing thousands of online banking customers over the Internet, having a mobile version designed to attack the Android and Blackberry smartphone operating systems? Well, imagine no more because the threat dubbed as Zitmo (Zeus-in-the-mobile), a mobile version of Zeus, is now attacking Android and Blackberry smartphones.

Kaspersky Lab made the discovery of Zeus-in-the-mobile and labeled it Zitmo. There have been about four samples of Zitmo that targets BlackBerry smartphones, while there is currently only one variation targeting Android smartphones.

For now, researchers have uncovered Zitmo to mostly target European countries. The command and control servers, an essential part of a Botnet and where it gets its instructions from, are in Germany, Italy, Poland and Spain. Researchers also mention that the Android version of Zitmo has a self-issued certificate data from last month. Proof in concept, researchers believe that the Android application was developed less than a month ago.

With these findings, it is possible that a new development of mobile botnets could be on the horizon. Zeus in its form for attacking computers became a worldwide epidemic at one time. With Zitmo's reach across the smartphone platform isle, Zeus-in-the-mobile could have twice the effect that the original Zeus had. Think of it as hitting twice as many targets with half of the ammo or firepower.