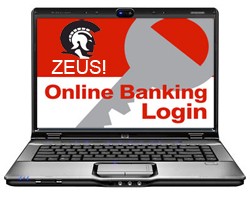 The days of physically holding up and robbing a bank have been virtually replaced by new sophisticated techniques carried out online usually through the use of a computer virus such as the Zeus Trojan. Just recently, this very thing happened when cybercriminals used the malicious Zeus Trojan computer program to break into the accounts of thousands of British internet banking users and transfer funds without their knowledge.

The recent incident of cybercrooks using the Zeus computer infection to break into thousands of online banking users' accounts, actually stole account details and passwords from about 3,000 people. After stealing the login credentials, the criminals were able to empty out the accounts of many of those people amounting to about $869,400 (£675,000) without their knowledge. This was accomplished in part due to the Trojan Zeus' ability to go undetected while performing malicious actions.

Zeus has been around for several years now known originally as the Zeus (Zbot) Botnet that targeted financial institutions. At that time, almost two years ago, the Zeus Botnet was the number one botnet composed of thousands of zombie (remotely controlled computers) PCs. It was even estimated that Zeus infected over 3.6 million PCs in the United States alone. The newer version of Zeus, which is the culprit in the latest online banking theft in Britain, is called "Zeus v3" (Zeus version 3), which can hide in websites, email attachments and website downloads. Once it is installed onto someone's PC, it can then record banking account information and passwords using that information to transfer up to $6,440 (£5,000) to other bank accounts according to mybanktracker.com.

Any computer user is susceptible to the infamous Zeus infection or any other popular botnet. Still to this day, Zeus remains to be a threat not only to computer users located in Britain, but any user who is a viable target. Who exactly is a target for Zeus? To answer that question, basically anyone who does not have up-to-date anti-virus or anti-spyware software running on their PC. Zeus is known to spread through spam emails, infected websites and even downloaded files. If your system is not protected, you could become the next victim whose online financial information is compromised and you may not even know it until it is too late. Remember, the recent event in Britain where Zeus emptied out online banking users' accounts, the computer user did not know what took place until they actually checked their bank account.

Do you currently run any type of anti-spware or anti-virus software? Is it up-to-date?