New Hampshire, Colorado and Virginia Top the List of States with Highest Malware Rates So Far in 2017 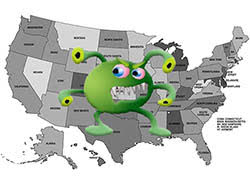 Computer users in New Hampshire were three times as likely to get a malware infection on their computers compared to the rest of the country. That's according to data released today by Enigma Software Group (ESG), makers of the SpyHunter anti-malware program.

The ESG research team compiled their latest data based on more than 1.5 million infections detected on SpyHunter in all 50 states in the first six months of 2017. Surprisingly to some, it turns out that the infection rate in New Hampshire was 201% higher than the average infection rate for all 50 states. Colorado, Virginia, New Jersey, and Oregon were the next highest states.

"It's hard to tell exactly why some states have higher infection rates than others," said ESG spokesperson Ryan Gerding. "In the top five alone, you've got east coast and west coast states, highly populated states and sparsely populated ones. Regardless of where you live, it's always important to stay vigilant for infections all the time."

Infections can come in many forms. Some may be adware, which forces massive amounts of popup advertising to appear on your computer. Some may be rogue anti-spyware programs, which look like legitimate programs that promise to remove infections, but in reality are just taking your money without doing anything. Many people have seen headlines about ransomware, which can lock important files and hold them hostage unless a ransom is paid. However, the vast majority of files detected can be considered nuisance-ware. Those are potentially unwanted programs that change browser settings, switch your default search engine, install unwanted toolbars, and slow down performance.

Other key findings from the ESG's mid-year infection analysis include:

ESG offers the following tips to keep computers protected from all kinds of malware.

Below is the full ranking of all 50 states and how much their infection rate differed from the national average in the first six months of 2017.