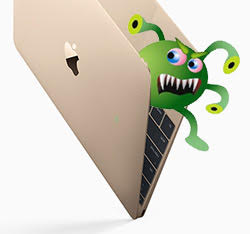 Malicious software creators are busier than ever conjuring up the latest concoction to seek unprecedented amounts of money from victimized computer users. Among the latest threats, Ransomware has taken the computer world by storm and has emerged into an epidemic where computer users are forced into paying a ransom fee to restore the computer files encrypted by an aggressive ransomware threat.

While the majority of ransomware threats have primarily targeted Windows PCs, today brings about a new era of malware as Apple computer users are hit with a new string of ransomware as the very first case targeting Mac computers.

Over the weekend, hackers targeted Apple customers with the very first campaign against Mac computers using the KeRanger Ransomware threat. As we know all-too-well, ransomware has been one of the most aggressive, damaging, and fastest-growing types of malware known to modern-day computers. Recent ransomware threats have encrypted files on infected computers and only given victimized computer users the sole option of paying a ransom free to ultimately decrypt and restore their files. Many cases of recent ransomware threats, such as CryptoLocker and CryptoWall, have resulted in many victimized computer users resorting to restoring their entire hard drive from a backup copy. In other cases, computer users consider their stored data a complete loss in the case that there is no backup available, or they end up paying the ransom fee to decrypt their files at the mercy of relentless hackers.

Apple Mac computers have had a history of being much more secure and less susceptible to malware threats. Traditionally, due to the much lower usage numbers of Mac computers versus Windows PC, hackers have written off the time invested and profitability margins of attacking Mac computers and primarily attack Windows PCs where the numbers are plentiful and odds of monetary gain are much higher.

The methods of spreading the Mac ransomware threat is through a tainted copy of a popular application known as Transmission, used to transfer data through the BitTorrent P2P file sharing network. Version 2.90 of the Transmission application is known to be the one infected with the KeRanger Ransomware, locks up infected Macs and demands a payment of 1 bitcoin ($400) to supposedly decrypt the files.

Since the outbreak of the KeRanger Mac Ransomware, the creators of Transmission are advising its users to upgrade to version 2.92, which is not infected with the ransomware. Additionally, the new version is said to automatically remove the ransomware from infected Macs.

The evidence is here; ransomware is a significant threat to the computer ecosystem as we know it. With ransomware now reaching Apple Mac computers, the potential outreach for such malware threats is unforeseeable. Computer users should let this be a lesson that prompts taking the action to properly backup your hard drive and ensure your software is up-to-date because ransomware is actively seeking its next victim and it could be you.

Comments (4)
By GoldSparrow in Computer Security
Translate To: Português