How Being a Naive Computer User Can Cost You Extra Money 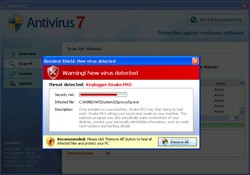 You may have seen it before, the infamous popup warning message that tells you that your computer is infected with some type of Trojan or malware. You attempt to remove it but it keeps popping up, urging you to scan your computer and then you fall into a trap of purchasing some type of bogus security software, or what is referred to as a rogue antispyware/rogue antivirus application, to remove the threats that the fake scanner detected.

Hackers have literally built an empire and a steady stream of income by creating new intuitive applications that are promoted and sold as security programs. Little do the computer users, who are confronted with these fake security programs, know that these types of programs are designed to eventually steal money from them. Stealing money from a computer user in this situation does not happen like you think it would, it is more of a passive method where the computer user eventually gives into a scam and willingly hands over the money.

Rogue antispyware/antivirus programs have become one of the most annoying computer security issues in the past few years. To a naive computer user, a simple popup warning message may seem like something that must be addressed immediately. Each instance that the computer user attempts to close the popup window, another one appears. A naive computer user thinks that the solution is to investigate the "issue" with their own knowledge which tells them to follow the on-screen instructions until they reach a feasible conclusion. To do this, they either click on a link provided by the popup message, or run a system scan with the software that is supposedly warning them of an infection. After the system scan has completed, the user is confronted with several threat results which may put a naive computer user into a mental "panic mode". At this point, the computer user is offered a program that says it will remove the scanned threats and solve all their PC problems. This is where the computer user becomes a hacker’s fish by taking the bait and purchasing the bogus security program thinking that it will finally solve their dilemma.

Computer users are lead to a false sense of satisfaction when they think that the "security software" magically installed itself and has been helping them detect malware all along. So what do they do? They end up breaking out their credit card and paying up to $80 or more for the fake security program. Not only have they authorized a charge on their credit card, but after they find out that they have purchased a bogus program, it becomes difficult to nearly impossible to dispute or reverse the charges. The creator, or hacker, of the bogus security software made his money and you are now out of about $80 while your computer is still displaying aggravating popup messages.

How do you keep this from happening to you?

First off, never purchase rogue security software. Once you have purchased a rogue application, then all bets are off, you just lost your money and it may end up costing you additional money to "fix" your computer. If you are ever confronted by bogus popup messages, it is best to immediately close your web browser. You can easily do this by pressing "Alt-F4" or manually end the program in the task manager by pressing "Ctrl-Alt-Delete".

After doing so, you may utilize a different browser to download a legitimate antispyware application to remove the threats. It is also recommended that computer users use extreme caution when following trending news stories online. Usually hackers use popular news stories, enticing videos and links to lead computer users to malware online.

Many popular rogue antispyware/antivirus programs such as AV Security Suite, Antivir Solution Pro, Defense Center and Antivirus 7, may actually disable or limit use of other programs installed on your computer. These rogue programs have also proven to be near impossible to manually remove. However, there are many legitimate security solutions, such as our SpyHunter application, that are specifically designed to detect and safely remove these threats automatically.

When was the last time that you were confronted with a bogus popup message that in the end tried to advertise or sell a rogue antispyware/antivirus program?