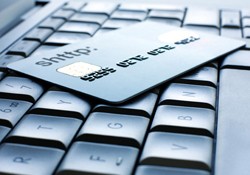 In some walks of life in the hacker world, you have not really made it until you have stolen nearly $1 billion, which a hacker ring has done from banks around the world recently. In what is known as one of the largest banking breaches known, a hacker ring that has been active since the end of 2013 has infiltrated over 100 banks in over 30 countries to make away with nearly $1 billion in total.

In the current high life of "everything is online," banking institutions have had more than their fair share of work cut out for them to combat cyber-attacks and relentless hackers who want to steal money. The face of bank robbers has changed drastically over the past decade or so. No longer are crooks required to put on a mask and physically walk into a bank to only hold officials at gunpoint demanding that they empty out the banking vault.

Today, the banking vaults have gone virtual, and hackers are gaining access to banks' computers through phishing schemes and other actions. In the recent banking theft, that has been an ongoing effort by a hacker group known as "Carbanak" after the software that they have used for the attacks, a method of phishing attacks was orchestrated with favorable results.

The Carbanak cybergang sent emails to banking employees that posed as normal office messages. Many of the unsuspecting banking employees clicked on the emails, which then allowed the hackers access to their systems. The security holes exploited by the Carbanak gang were a timely matter that took advantage of vulnerabilities and security holes that many banking institutions possessed.

Hackers in the recent attacks utilized remote access tools (RATs) to work inside of the networks for months on end. During this time, the hackers were able to monitor the actions of certain employees and later use that information to conduct further attacks. In all, the hacks took months to complete and end up in nearly $1 billion being stolen as a total from over 100 banks throughout the world.

Some security experts believe that the hacker group may have purchased access to some of the banks from other hackers who have previously broken into the systems. In any case, attempting to make away with nearly $1 billion has gained the attention of banks around the world. 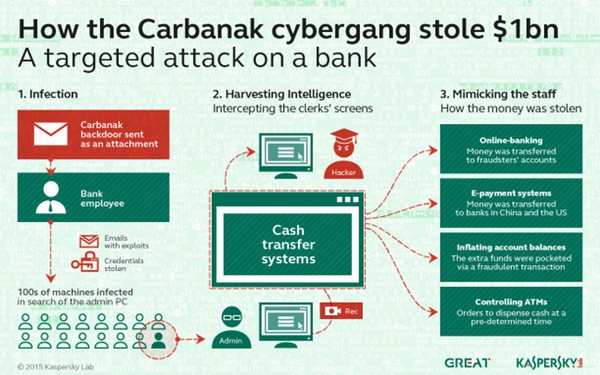 As compelling as the banking theft incident may seem, it was no easy feat for the hackers to carry it out. The graphic illustration above from Kaspersky is a simplistic diagram of how the cybergang Carbanak, also known as Anunak, was able to steal $1 billion through targeted attacks on banks. It may look simple to most, but be assured that these hackers were well organized and efficient with their efforts. It's not every day that you hear about $1 billion being stolen from a bank, is it?