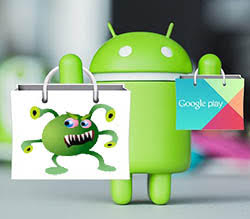 Google Play's Product Manager Andrew Ahn emphasizes the improved effectiveness of the company's own malware filter. This is backed up by the fact that at least 99% of the abusive applications have been blocked before they could even reach Google Play Store and become available for download by users. According to Ahn, this improved capability to detect potentially dangerous content has been achieved through new machine learning models and better techniques. Google has stated that it plans to level further up its security during the current year, making Google Play Store “the most trusted and safe” place for users on the Internet.

Overall, the applications with potentially malicious features that have attempted to enter Google Play Store can be divided into three categories. The members of the first group try to impersonate other famous apps and thus persuade users into downloading and installing them on their Android devices. These apps are known as copycats, and they have constituted around 25% of all malicious applications blocked by Google Play Store's inbuilt filters. The methods of the hackers here include using confusable Unicode characters or hiding impersonating app icons on a different spot. To the second group of malicious apps belong those who try to push inappropriate content on victim's devices. Tens of thousands of such apps have also been detected and blocked by Google's security systems. These apps typically promote extreme violence, illegal activities, hate, but also pornographic content.

The third category of dangerous apps consists of the so-called Potentially Harmful Programs, also known as PUPs. Even though their importance has frequently been underestimated, experts say that these apps can cause a lot of damage to infected devices. The malicious features of PUPs could lead to stealing user data, deploying Trojans, and conducting SMS fraud. Google claims to have managed to reduce by a half the total number of PUPs targeting Android mobile devices last year.