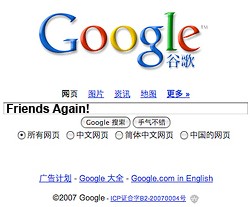 During the beginning of this year, several online media sources predicted that Google would exit China due to sophisticated hacking attacks. Now that it is 7-months later, China is looking for a way to coexist starting with the renewal of Google's ICP (Internet Content Provider) license allowing them to do business in China again.

We are no strangers to discovering privacy and censorship issues, especially when it comes to helping computer users with online security which is our number one focus. Over the past 7 months there has been a battle between Google and China over privacy and censorship and it looks like it has finally come to an end.

Just over a week ago, the Chinese government renewed Google's license to operate in China. This puts an end to the public battle between the two which resulted in Google to cease censoring search results in China. Basically, Chinese users would be redirected to the Hong Kong Google site to receive uncensored search results in Chinese. Just before the deadline for renewal of Google's ICP license last month, Google decided to no longer redirect search traffic from China to the Hong Kong search engine.

The principal analyst at Enderle Group (a technology authority group), Rob Enderle, said in reference to Google that, "They really have no choice if they want to stay in that region. That was the problem of taking a position the company could not sustain. You don't fight governments. Google had a choice, capitulate or leave. They capitulated." Analysts also believe that this move is good for Google from a financial perspective because China has such a large economic effect on the world. In the long run, Google can't afford to be locked out of China. On this issue Enderle said, "Being unable to compete in what may become the largest economy in the world would leave an impression of coming obsolescence that no company wants to create."

China has more Internet users than any other country in the world. This is good news for Google in renewal of their ICP license. It is possible that the previous cyber attacks that may have sparked the disagreements between China's government and Google in the first place, have subsided. Still researchers and analysts believe the issues that prompted Google to shut down its Chinese search page in the first place are still lingering around. Nevertheless, the recent happenings and ICP license renewal is a step towards a revived relationship between Google and China.