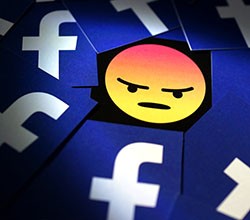 Facebook, the social media giant that is home to over 2.3 billion monthly active users, has been slapped with an unprecedented fine of $5 billion by the FTC (Federal Trade Commission). The FTC announced the settlement with Facebook over the company's privacy policies, which is the largest fine ever imposed by the FTC or U.S. government for any violation.

In today's landscape of the Internet, social media, and the news media, there's widespread controversy over the matters in an endless barrage of subject matters and privacy. Unfortunately, there's no end to any resolution to assuring the public that their data is safeguarded within the realm of large social media platforms like Facebook.

Facebook's settlement comes amid the looming calls into Washington for much-needed accountability and transparency, which has been an increasing concern for many including politicians and users who have viewed the social media companies practices as being outright dangerous. The settlement deal was reached after many years of damaging admissions about Facebook practices, which in part spawned from the inadvertent exposure of 87 million users' data in the Cambridge Analytical data fiasco.

To add insult to injury, the Securities and Exchange Commission announced that Facebook agreed to pay $100 million to settle charges for misleading disclosures regarding the risk of misuse of Facebook user data." The separate settlement is another component that roots from the Cambridge Analytical user data privacy issue, which is a record high penalty for the SEC imposing on this kind of disclosure failure.

The probe into Facebook conducted by the FTC started in March 2018 with a concern that the social media giant had violated the terms of a previous agreement. The agreement required Facebook to give users clear notifications when their data was being shared with third parties, which is a direct coloration to the data shared with Cambridge Analytical at the time.

A post published by Facebook just after the FTC's announcement today from company CEO and founder Mark Zuckerberg paves an outline as to the changes the company will make. In the post, Zuckerberg said, "We've agreed to pay a historic fine, but even more important, we're going to make some major structural changes to how we build products and run this company. We have a responsibility to protect people's privacy. We already work hard to live up to this responsibility, but now we're going to set a completely new standard for our industry."

Director of the FTC's enforcement division, James Kohm, said, "Part of getting this tremendous result with the tools we had is we didn't need to depose him (Zuckerberg) but we could use that to get more protections for the public."

Hitting Facebook with such a fine has moved the needle to address user privacy concerns when it comes to Internet conglomerates or entities that harbor large amounts of user data. A rather clear and strong message has been sent and heard around the world with the $5 billion FTC fine. The magnitude of the penalty sets a precedent for future violations by Facebook, or any other company, for that matter. For obvious reasons, there is no shame or lack of using a strong-arm by the FTC in slapping Facebook with such an enormous fine. The FTC clearly expressed in a statement accompanying the Facebook fine announcement that they "will use that authority aggressively."

The lack of personal accountability by Facebook's chief executive was one of many issues that the FTC took in their decision to set such a fine. It's likely that in a hypothetical litigated case by the FTC that a judge would fail to have imposed a civil penalty that is close to this one. Under the settlement, Zuckerberg will be required to certify that Facebook complies with new privacy structures and if not, be subject to civil and criminal penalties.

In the totality of what a $5 billion fine means for Facebook, it's actually a fraction of the company's annual revenue, which was well over $40 billion in 2018 alone. Some may believe that the fine may not be enough, while for others it has sent a strong message for them to think twice about their responsibility to safeguard user data, especially when running anything remotely as large as Facebook with millions of users and their accompanying personal data.

The question we must ask ourselves and Facebook is if they will assure users that they are taking the necessary actions to beef up their user privacy methods after the fine?