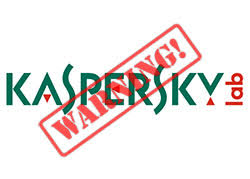 It was just a few months ago that Kaspersky Lab Antivirus software was banned from U.S. government computers and how it looks as if the UK is about to follow suit starting with a stern warning against the use of Kaspersky.

The United Kingdom's cyber security agency has made it publicly known that they are warning against the use of the Russian security software that is claimed to be used for cyber espionage attacks against local officials. Additionally, Kaspersky's Antivirus software has been abandoned by some British companies with their own bans after a growing concern over the software being used to facilitate espionage or influence and disrupt operations of certain government entities.

The difference in the U.S. banning Kaspersky software and the UK giving a warning against its use is that the UK appears to give Kaspersky the benefit of the doubt by first reviewing the Russian security software. UK officials are working with Kaspersky to evaluate their products and figure out if they are in fact safe for government use.

In a public letter issued by the National Cyber Security Centre (NCSC) CEO in the UK, Ciaran Martin, he explains, "In drawing this guidance to your attention today, it is our aim to enable departments to make informed, risk-based decisions on your choice of AV provider. To that end, we advise that where it is assessed that access to the information by the Russian state would be a risk to national security, a Russia-based AV company should not be chosen. In practical terms, this means that for systems processing information classified SECRET and above, a Russia-based provider should never be used."

Handling of data between government agencies and officials has always been a sensitive subject matter, and rightfully so. The guidance suggested by UK government officials may be followed through soon enough when it comes to deciding if they should outright ban Kaspersky AV software or now. However, until that decision is reached it appears that the proper channels and directives are being taken to give Kaspersky a fair shake with independent verification to provide government agencies the assurance needed to continue use of Kaspersky Lab Antivirus software.

Interestingly enough, to somewhat go against the grain and notion of innocence until proven guilty, many British companies have taken the liberty to jump the gun and ban the use of Kaspersky software before the UK government can make its final decision on the use of the software.

To hear it from Kaspersky, they have said that they are willing to work and cooperate with the British government to address any security concerns, which is the root of the issue at hand.

IN having doubts about how data is transferred or accessed with the use of certain software is always a looming thought back in the minds of government and state officials around the world. In knowing that the U.S. has already banned the use of Kaspersky software in the capacity of their governments already raises a red flag in the eyes of many in the UK. However the UK government determines its decision to use or ban Kaspersky software, there will be a lasting stain placed on the reputation of Kaspersky long after the gavel has fallen.