Phishing emails are not much different from spam messages as they both serve a purpose of swindling PC users to the point that they either click on a malicious link or download/install a malicious application.

The most recent identified phishing scam, purported to come from AT&T, attempts to inform the recipient that their new bill is ready to view (example in Figure 1 below). Probably the most disturbing part about this phishing message, is that it is almost an exact copy of legitimate AT&T emails commonly sent to customers to simply make them aware that their upcoming bill is ready to be viewed. 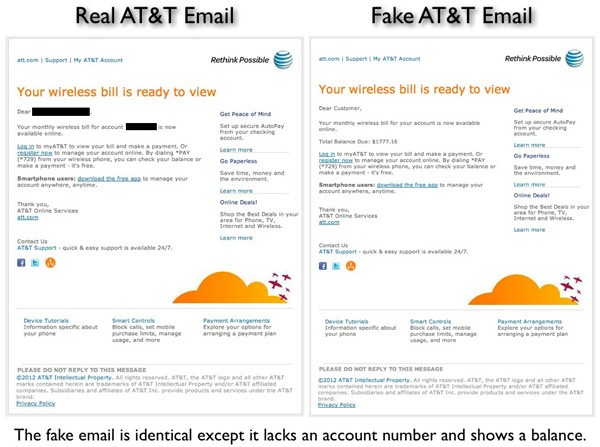 Naturally, when you receive an email about an upcoming bill, you will want to first make sure you have the funds to pay it. Secondly, you will probably click on the link within the email to quickly load your online bill-pay site. In the case of the AT&T phishing 'your bill is ready to view' message, the links provided within the message redirects users to a site hosting the Blackhole exploit kit.

Loading the Blackhole exploit kit, usually performed when the site redirection happens, will essentially download malware onto the computer. This particular malware, found to be new threats not detected by antivirus or antimalware software, may inject itself into running processes where it will contact a remote server found to be part of a botnet. Researchers from Websense, have contemplated over the idea that the attack looks like it is a variant of the infamous Zeus family of malware.

We reported on many occasions of the dangers that come with Zeus in it being an aggressive botnet formed to target financial institutions bypassing detection.

Let's not forget that this particular AT&T phishing campaign starts off with a very convincing spam email message. With such a threat having the consequences of infecting PCs with a botnet, all at the hands of the Blackhole exploit kit doing what it was originally conceived to do, we may be looking at another takeover by a botnet. In such a case, PCs becoming infected from this bogus AT&T 'your bill is ready to view' phishing message, a massive botnet (group of infected and compromised computers) could be formed to carry out a plethora of malicious actions over the internet. Who knows, this could be the next Conficker-type botnet in the making.