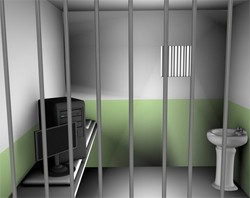 A 27 year-old Russian-Armenian hacker, Georg Avanesov, was recently arrested for renting and selling a botnet designed to send spam and conduct attacks on websites enabling cybercriminals to steal money from online bank accounts.

Dutch and Armenian authorities were able to bust Avenesov after a recent sting operation involving many security experts. Dutch prosecutors believe that the botnet operation brought in about $140,000 a month in earnings mainly due to Avanesov's ability to sell-off parts of the sophisticated botnet and later extend it again by infecting additional computers.

Botnets are known as group of PCs infected and compromised by a sophisticated piece of malware. The malware in the case of the hacker Avanesov has been traced back to the Bredolab infection. The Bredolab is known to be a dangerous piece of malware that has the ability to download other malware on a compromised computer. Bredolab was also known to be installed by a fake Microsoft Outlook update. At one time, the Bredolab botnet (group of infected computers) had used 143 servers, part of a network run by LeaseWeb, that were later shutdown but accounted for more than 225,000 compromised computers. Dutch authorities launched a denial-of-service attack against this network as Bredolab was being shut down which help lead them to tracking down Avanesov.

After 'virtually' tracking down Avanesov, authorities attempted to lure him to Schipol, an airport near Amsterdam, where they were prepared to follow him and wait for him to perform his hacker activities by taking control of the Bredolab botnet. Unfortunately, the authorities were unsuccessful at this attempt because Avanesov failed to show. Authorities later relied on their group of security experts who noticed strange activity with Bredolab and later led them to detaining Avanesov in Armenia.

You may think of this apprehension of Avanesov as a bank robber who never gets enough. He has to make one more score and during that last score he gets caught red-handed.

Botnets are consistently bombarding cyber-authorities around the world lately. Busting Georg Avanesov is one out of hundreds to thousands of botnet organizers around the world with many followers and hired money mules instructed to carry out their malicious actions for monetary gain. It is not an easy task to track down people who run botnets as we have only witness a handful of hackers to get caught just this year. The work for cyber-police and investigators has never been as important as it is now. Authorities from around the world must stay diligent or we will continually see more online banking theft incidents at unprecedented levels.

Do you foresee authorities making headway anytime soon with their quest to seek out cybercrooks who steal money from online banks using botnets and other sophisticated malware?